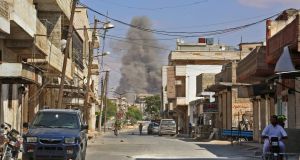 Russian and Syrian warplanes pounded towns in Syria’s opposition-held Idlib province on Saturday, a day after a summit of the presidents of Turkey, Iran and Russia failed to agree on a ceasefire that would forestall a Russian-backed offensive.

Witnesses and rescuers said at least a dozen air strikes hit a string of villages and towns in southern Idlib and the town of Latamneh in northern Hama, where rebels are still in control.

Syrian helicopters dropped so-called barrel bombs – containers filled with explosive material – on civilian homes on the outskirts of the city of Khan Sheikhoun, two residents of the area in southern Idlib said.

Three civilians were killed in the village of Abdeen in southern Idlib, a civil defence source said.

Friday’s summit had focused on a looming military operation in Idlib, the last major stronghold of active opposition in Syria to the rule of president Bashar al-Assad.

Turkish president Tayyip Erdogan pushed for a ceasefire during the summit but Russian president Vladimir Putin said a truce would be pointless as it would not involve Islamist militant groups Mr Assad and his allies deem as terrorists.

Tehran and Moscow have helped Mr Assad turn the course of the war against an array of opponents ranging from Western-backed rebels to the Islamist militants, while Turkey is a leading opposition supporter and has troops in the country.

The United Nations fears a full-scale offensive could cause a humanitarian catastrophe involving tens of thousands of civilians.–Reuters