China: How to look after the world’s fastest ageing population 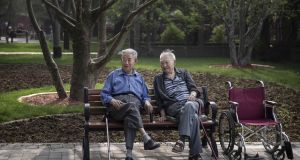 Chinese men chat as they watch women dance in Ritan Park in Beijing, China. By 2050, 35 per cent of China’s population will be aged 60 or over. Photograph: Kevin Frayer/Getty Images

Before the heat of the day kicks in, silver-haired people gather in groups in Beijing’s Ritan Park to practise their tai chi exercises, tracing arcs with their hands, turning gracefully and planting their slippered feet in concert.

Ritan Park is a place for retirees to relax, spend time with each other and get some exercise, but the growing number of elderly people is also providing a challenge for the state and for the current younger generations in how to look after the world’s fastest ageing population.

In a gable near the altar at the centre of the park, where ceremonial sacrifices were made during imperial times, six retirees are gathered around a portable speaker. A man belts out a ballad and the listeners join in the chorus.

Individual retirees are here at all times of the day, walking energetically, waving their arms as they go. Some strollers walk backwards, as this has apparently even greater health benefits.

At a bridge near the lily pond, an old man in a wheelchair is pushed by his son, and they stop to admire the flowers for a while.

Meanwhile at the south gate, a grey-haired man sitting on a bench plays a traditional Chinese flute, and the sound carries far across the public gardens.

Ageing populations are a problem in many countries, but three decades of population control measures have skewed China’s demographics, and while the government is easing restrictions and trying to encourage people to have more children, by 2030 one quarter of China’s population is expected to be aged 60 or older.

By 2050, this is forecast to rise to 35 per cent of the population, meaning China’s elderly population will be more than the total populations of Germany, France, Japan and Britain combined.

Traditionally, elderly care is the responsibility of the children, particularly in a Confucian society where respect for elders is part of the social fabric. There is a legal requirement for children to look after their parents’ “spiritual and physical needs”.

The single children of three decades of the one child policy face a burden. Each couple has to support four parents, while raising their own offspring.

President Xi Jinping has also made pronouncements about the need to deal with the growing dependency ratio, and the government is working to expand medical insurance coverage and pensions.

One woman surnamed Feng (36), who is married with no children, says the pressure is growing as her parents and her husband’s parents get older. Both she and her husband work in IT.

“If the parents get a serious illness, which costs a lot of money, I would consider selling my apartment – thank God Beijing apartments are worth a lot of money,” she says.

Her father-in-law has diabetes and sometimes stays in hospital for long periods, which is expensive.

“The parents have a bit of a pension but it’s not enough, and after we have paid for our mortgage, we really don’t have much money left at all,” she continues.

“I think this is enough to maintain a basic standard of living, but I hope I can rely on the government more by the time I retire,” she says.

Half of Chinese households with elderly residents are seniors who live on their own or with their spouses, and this could rise to 90 per cent.

“There is less pressure on our family because we are not only children. I am not planning to have children, so I’d prefer to stay at home when I am old, then if I have no mobility, move to a home if I can afford it,” she says.

Outside the city, in rural China, many seniors are left behind by their offspring who have gone to work in the cities. Demand for places in retirement homes is extremely high, and most will only take people who do not have children or who have disabilities.

Some seniors are setting up their own initiatives for elderly care, such as group schemes known as baotuan yanglao. Another popular initiative is university for the elderly – eight million seniors signed up for university courses in 2017.

In Ritan Park, by the time the evening comes, a formation of seniors gathers near the north gate and the open-air ballroom dancing gets going, a good-natured and energetic event. As China’s population ages, demand for places in the dance troupe is going to increase.