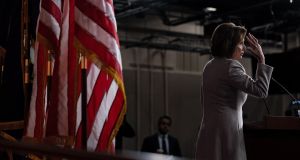 Nancy Pelosi led a bipartisan delegation to Jordan at the weekend where a meeting with King Abdullah II took place. File photograph: The New York Times

US speaker of the House of Representatives Nancy Pelosi has paid an unannounced visit to Jordan to discuss the fallout from President Donald Trump’s decision to withdraw troops from Syria, where Turkey and the Kurds are accusing each other of violating a temporary ceasefire.

Ms Pelosi led a bipartisan congressional delegation to Jordan and met the country’s ruler, King Abdullah II, on Saturday evening. Jordan is a staunch US ally and contributed to the global coalition that defeated Islamic State in Syria.

The visit came at “a critical time for the security and stability of the region”, said Ms Pelosi. “With the deepening crisis in Syria after Turkey’s incursion, our delegation has engaged in vital discussions about the impact to regional stability, increased flow of refugees, and the dangerous opening that has been provided to Isis, Iran and Russia.”

Both sides have accused each other of violating the truce. Turkey’s defence ministry said at the weekend that Kurdish fighters had carried out 14 “provocative” attacks but insisted its own forces were respecting the agreement.

The Kurdish Red Crescent, a humanitarian group unaffiliated with the International Committee for the Red Cross, said 20 civilians had died and another 20 had been injured in attacks by Turkey or its allies since the start of the ceasefire.

Mr Trump has faced rare bipartisan criticism for his surprise announcement this month that American troops would stand aside as Turkey mounted an operation to push US-backed Kurdish forces in Syria at least 20 miles from its southern border.

The US withdrawal has been described by Congress’s most senior Republican leader, Mitch McConnell, as “a grave mistake”. Moreover it has led the Kurds to rely on Moscow to broker an agreement with the Syrian regime to protect them against the Turks.

Ms Pelosi and other senior Democrats walked out of an acrimonious meeting with Mr Trump over the issue last week and accused the president of having an angry “meltdown”.

Saturday’s unscheduled visit was in keeping with several overseas delegations led by Ms Pelosi this year that have highlighted gaps between the Trump administration’s position and those held by Congress, including many Republicans.

In April, she visited the Irish Border to warn about the risk of a hard Brexit threatening the Belfast Agreement . Trump administration officials have said they would “enthusiastically” back Britain leaving the European Union without a deal.

Ms Pelosi and other congressional leaders attended the Munich Security Conference in February. At that forum they delivered reassuring messages to some of the European leaders whom Mr Trump has accused of failing to contribute their share to Nato and the US-led campaign against Isis. – Guardian