Palmyra again in sights for Syrian army after Aleppo engagement 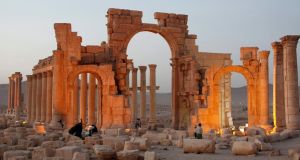 An ancient monument in the city of Palmyra, photographed in April 2016 after the Syrian army had regained control of it from Islamic State, and which is now back under the terror group’s control. File photograph: Youssef Badawi/EPA

With control of Aleppo secured, Syria and Russia may now give priority to the recapture of the ancient city of Palmyra, rather than the northwestern province of Idlib, which has been the main base of anti-government insurgents dominated by the jihadist group Jabhat Fateh al-Sham.

Palmyra was seized by the Islamic State terror group while the Syrian army and its allies were fully engaged in the battle for Aleppo.

For the Syrian government and its allies, the rebels in control of Idlib are currently a far greater threat than Islamic State, also known as Isis.

While this group is on the wane in both Syria and Iraq, Jabhat Fateh al-Sham – formerly known as Jabhat al-Nusra – has become the most powerful radical movement in Syria and is giving impetus to the return of al-Qaeda, to which it is linked, as the world’s pre-eminent fundamentalist franchise.

In preparation for the expected Idlib offensive now that eastern Aleppo has been recaptured by the regime, Russian warplanes have been staging bombing raids on Jabhat Fateh al-Sham and allied targets.

Idlib is the most important strategic asset of Jabhat Fateh al-Sham and its jihadi partners. The province stretches from the Turkish border, across which fighters and supplies flow, to the Damascus-controlled Latakia province.

It hosts Russia’s naval and air bases and is the Mediterranean gateway for food, fuel and other supplies for the government-ruled heartland.

In 2014-15, Jabhat al-Nusra repeatedly mounted attacks into Latakia, menacing the stronghold of the family of president Bashar al-Assad at the mountain village of Qardaha.

Islamic State’s return to Palmyra demonstrated, once again, that the Syrian army is undermanned and overstretched and that the group remains a force capable of challenging the government, Russia and the US-led coalition dedicated to the jihadists’ elimination.

Both Islamic State and Jabhat Fateh al-Sham will have to be crushed if Syria and Iraq are to be free of the jihadist presence and the threat radicals present to the region and the international community.

After the celebrated rout of Islamic State at Palmyra last March, when the Syrian army regained control of the ancient city, the return of the brutal and destructive group amounts to an embarrassing reverse for the Syrians and the Russians, particularly since Moscow had marked the liberation with a concert in the elegant Roman theatre and established a defensive base near the ruins.

The seizure by Islamic State of a store of Russian weapons and armoured vehicles at Palmyra heightened the humiliation occasioned by its loss.

The head of the US military mission fighting Islamic State, Lieut Gen Stephen Townsend, expressed irritation over this seizure of equipment by saying the US would strike if the weapons were transported to another location.

“Basically anything they seized poses a threat to the coalition, but we can manage those threats and we will,” he said.

The return to Palmyra by Islamic State fighters, reportedly sweeping in columns across the border from Iraq, where the US-backed Iraqi government is battling the jihadists in Mosul, also amounts to a reverse for the US, which claims to be using its air power to contain Islamic State.

US surveillance teams should have detected Islamic State fighters advancing toward Palmyra and called up war planes to bomb the column.

In May 2015, before Russia intervened in the Syrian conflict, the US was criticised for failing to take out the Islamic State convoy which initially captured the city and the 2,000 year-old ruins, where they executed captured Syrian soldiers and blew up ancient monuments.

US, Iraqi government and allied forces have not interdicted Islamic State commanders and fighters fleeing the ongoing Mosul battle and settling in Raqqa, the terror group’s de facto capital in Syria.

According to Raqqa is Being Slaughtered Silently, an underground online blog from within the city, the group’s fighters escaping from war zones are taking over the homes of civilians who travel or relocate to the countryside due to the group’s brutal repression.

Furthermore, movement of Isis operatives from Mosul to Raqqa has not been halted by the advance by the Kurdish-dominated Democratic Forces, armed and trained by the US, because the Kurds have stalled, demanding the US exert pressure on Turkey to cease its military intervention in northern Syria and opposition to a Syrian Kurdish canton along the border.