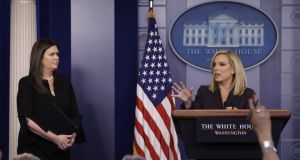 US president Donald Trump aims to “immediately” send members of the national guard to protect the country’s southern border with Mexico, his administration announced on Wednesday.

Speaking to reporters at the White House, the homeland security secretary, Kirstjen Nielsen, said Mr Trump had directed “the Department of Defense and the Department of Homeland Security to work with governors to deploy the national guard” to the border.

Ms Nielsen and the White House press secretary, Sarah Sanders, dodged questions about the sudden urgency, and whether the deployment of the national guard was tied to reports Mr Trump had seen on Fox News about “a caravan” from Central America that was headed to the border.

Ms Nielsen was unable to answer questions about the size of the deployment and the cost. She said the number of guardsmen called up “will be as many as needed to fill the gaps today”. However, she told reporters “we do hope the deployment begins immediately”.

On a conference call with reporters, a senior administration official told reporters that “we don’t have a date” for the national guard to be deployed, saying: “This is the first step in a process.”

She said that the function of the national guard on the border would “include everything from aerial surveillance and some of the support functions” for the border patrol.

Under US law, the national guard is forbidden from acting as civilian law enforcement on American soil. However, guardsmen have been deployed as support personnel on the border both during the George W Bush and Barack Obama administrations.

Ms Nielsen was challenged about Mr Trump’s claims on Twitter that work on the border wall had begun, when in fact, the only activity so far has been to replace old, existing fencing. “To us, it’s all new wall,” she said.

Ms Nielsen also cleared up some confusion about Mr Trump’s tweets in the past week when he suggested the military would help build his border wall. She said “what he meant is some land on the border that [the] Department of Defense owns”. Mostly notably, this includes the Barry Goldwater air force range, a bombing range that includes sections of the border.

When asked about the cost of deploying guardsmen, Ms Sanders shrugged it off. “I don’t think you can put a cost on American life,” she said. – Guardian