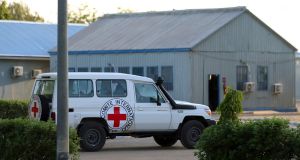 A Red Cross vehicle arrives at the air force base in Maiduguri, Nigeria, on March 21st as Boko Haram militants return girls who were abducted from their Nigeria school a month earlier. Photograph: REUTERS/Afolabi Sotunde

A suspected Boko Haram attack in the northeast Nigerian city of Maiduguri killed 15 people and wounded 68, an emergency agency official said on Monday, in the biggest strike since the government said it was in talks with the Islamist group.

Maiduguri is the epicentre of the nine-year conflict with Boko Haram that has killed more than 20,000 people.

President Muhammadu Buhari has prioritised improving security and previously said the group, which is trying establish an Islamic State and split into two factions in 2016, had been defeated.

The gun attack took place on Sunday night in Bale Shuwari, a settlement near army barracks on the edge of Maiduguri’s inner city, military sources said.

“68 were injured and 15 innocent people were killed,” said Bello Dambatta, chairman of the rapid response team for the State Emergency Management Agency (SEMA).

It is the most significant attack on the city since the government said last week it was is in talks with the insurgents with the aim of securing a permanent ceasefire.

The government has not disclosed which elements of Boko Haram it is in discussions with, and neither was it clear which faction carried out Sunday’s attack. – Reuters