US sanctions inflaming tensions without punishing those responsible, say experts 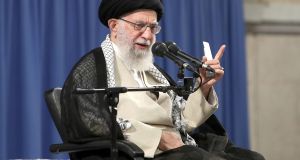 The latest round of US sanctions on senior Iranian figures could finish off the remote possibility of talks between Tehran and Washington.

Experts argue the ill-prepared and poorly conceived measures adopted after Iran shot down a US spy drone off the Iranian coast have inflamed tensions without punishing those responsible or forcing Iran to alter regional policies.

International Crisis Group president Robert Malley told the New York Times the move was “Symbolic politics at its worst. At every level it is illogical, counterproductive or useless.”

US president Donald Trump was clearly speaking without having been briefed by advisers when he called for sanctions on Ayatollah Khomeini, founder of the Islamic Republic, who died 30 years ago.

Ayatollah Ali Khamenei (80), succeeded Khomeini as “vilayet i-faqih”, or guardian jurist, a position conferred only in Shia Islam. Khamenei is not only an influential religious figure but also head of state, ultimate decision-maker, military commander-in-chief, and head of charitable foundations worth $200 billion (€175.7 billion).

He rules over elected government officials, the administration, judiciary and media. Blacklisting hundreds of thousands of Iranians closely or vaguely connected with Khamenei is impossible, while the foundations operate domestically and do not hold foreign bank accounts that could be seized.

Trump and his predecessors had, until Monday, wisely refrained from sanctioning Khamenei as this means targeting his office, which is the foundation of the faith-based Iranian system of governance. Sanctions amount to a threat of “regime change”, which Trump denies he seeks.

This action could be a dangerous departure as Khamenei counts millions of followers among Shias in Iran, Lebanon, Iraq and elsewhere. An angry individual or group could retaliate without authorisation from Khamenei, risking a war that could devastate Iran and the Gulf and disrupt the flow of oil to Europe and Asia.

In response to the imposition of sanctions on Khamenei, a worried Iraqi president, Barham Salih, reiterated Baghdad’s refusal to permit US forces to use its air bases for strikes on Iran.

Individual commanders of Iran’s Revolutionary Guards were also sanctioned but they, like Khamenei, do not travel abroad and have no financial interests outside Iran. Iranians have been warned not to risk either departing the country or using foreign banking, as their country has suffered punitive sanctions since the 1979 overthrow of the shah, a US ally.

Sanctioning US-educated foreign minister Mohamed Javad Zarif could be counterproductive, as this would make it difficult for him to visit New York for UN sessions and to maintain contacts with the EU. Barring talks with Zarif – who negotiated the 2015 nuclear deal with his US counterpart John Kerry – could put an end to non-US diplomatic efforts to defuse tension and reach uneasy coexistence between Iran and the US.

Since May last year, when Trump withdrew from the international agreement providing for the dismantling of Iran’s nuclear programme in exchange for sanctions relief, the US has imposed 1,000 sanctions on Iran, cutting oil and other exports, shrinking the economy, and causing the value of the currency to plummet by 60 per cent. Iranian civilians, not their rulers, are paying the price.