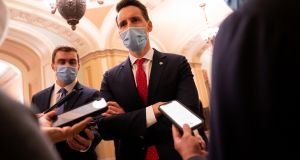 Senator Josh Hawley, a Republican from Missouri, speaks to the media in the US Capitol early on Thursday. Photograph: Erin Scott/Bloomberg

Simon & Schuster has said it would cancel the publication of an upcoming book by senator Josh Hawley, one of several members of Congress who tried to overturn the results of the US presidential election.

Hawley, a Republican from Missouri and an ally of President Donald Trump, has been criticised for challenging the election results and accused of helping incite the mob that stormed the Capitol on Wednesday. His book, The Tyranny of Big Tech, was scheduled to be published in June.

“We did not come to this decision lightly,” Simon & Schuster said in a statement. “As a publisher it will always be our mission to amplify a variety of voices and viewpoints: At the same time we take seriously our larger public responsibility as citizens, and cannot support Senator Hawley after his role in what became a dangerous threat.”

In a statement posted to Twitter, Mr Hawley said that the cancellation of his book was an affront to the First Amendment. “This could not be more Orwellian,” he said. “Simon & Schuster is cancelling my contract because I was representing my constituents, leading a debate on the Senate floor on voter integrity, which they have now decided to redefine as sedition.”

The cancellation signalled the pitfalls that mainstream publishers face as they attempt to straddle the partisan divide in a hyperpolarised and volatile political environment.

The biggest commercial publishers have long released works by both Democrats and Republicans, and most have dedicated imprints for works by politicians and pundits on the right. But some publishing professionals wondered if the violence at the Capitol would make it untenable for them to work with conservative authors who have questioned the legitimacy of the election or taken other incendiary positions.

In the past four years, a number of people from Mr Trump’s inner circle have gotten book deals. Macmillan published a memoir by Sarah Huckabee Sanders, who served as White House press secretary under Mr Trump. Donald Trump jr, the president’s eldest son, released a book with Hachette and self-published another.

Simon & Schuster, one of the “Big Five” book publishers in the United States, which Penguin Random House agreed to buy in November, has released several major political books in recent years, including Too Much and Never Enough by Mary Trump, a niece of the president, Rage by Bob Woodward, and The Room Where It Happened by John Bolton, a former national security adviser in the Trump administration. It has also published conservative firebrands like Sean Hannity and Tucker Carlson.

The Capitol rampage further complicated the already fraught question of whether or not publishers would release a memoir by Trump. During most election cycles, publishers are quick to snap up books from the former president, first lady and administration officials.

But the escalation of the rhetoric from the president and some of his supporters in recent weeks has likely changed the calculus for editors and publishers wary of provoking a backlash from readers and employees. – New York Times