New daily record of 8,248 cases recorded, along with 20 further deaths 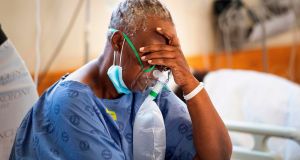 A patient with Covid-19 breaths in oxygen in the Covid-19 ward at Khayelitsha Hospital, outside Cape Town. South Africa has been hit by a new variant of the coronavirus which is believed to be more contagious than previous forms. Photograph: Rodger Bosch/AFP via Getty Images

A small number of cases of the South African variant of Covid-19 have been detected for the first time in Ireland.

Chief medical officer Tony Holohan confirmed that three cases of the South African variant had been detected on Friday.

The news comes as a further 20 deaths of Covid-19 patients were reported by the National Public Health Emergency Team (Nphet). This was the highest daily death toll since May and brings to 2,327 the total number of deaths in the State since the pandemic began.

A further 8,248 confirmed cases of the disease have also been reported, bringing to 135,884 the total number of cases in the Republic.

It is the highest daily total for cases, exceeding the previous record set on Wednesday of 7,836.

The South African strain emerged in August in South Africa’s eastern Cape region, before spreading to other provinces as infections accelerated in recent weeks.

The new variant has been linked to the surge in Covid cases in South Africa and health experts fear that it is not only more infectious than previous forms of the virus but could make some vaccines less effective.

In a statement on Friday evening, Dr Holohan said: “Three cases of a new variant of Covid-19 recently identified in South Africa have been confirmed in Ireland today by whole genome sequencing. All of the cases identified are directly associated with recent travel from South Africa.

“Anyone who has travelled from South Africa recently is advised to self-isolate for 14 days and identify themselves through a GP for testing as soon as possible.

“We are particularly advising healthcare workers travelling from South Africa, that it is essential that they self-isolate for 14 days before entering/re-entering the workplace.

1151 people in hospital, 109 in ICU. We can turn this around. What we are doing now, and what we do over the coming weeks, will determine the course of some peoples lives, and the impact on our health services. Stay home, follow public health guidance, protect each other. pic.twitter.com/WyfA5x1OVF

“While this variant has not yet been identified in many European countries we believe the identification here reflects the extent of genome sequencing surveillance in Ireland.”

Dr Cillian De Gascun, medical virologist and director of the National Virus Reference Laboratory, said; “The ECDC (European Centre for Disease Prevention and Control) assessment states that preliminary analyses indicate that the South African variant is associated with a heightened viral load and may have increased transmissibility.

“It also states that there is no evidence to date that this variant is associated with higher severity of infection.

“There is currently not enough information available to determine whether this variant poses a possible risk related to vaccine match and effectiveness. The antigenic characterisation of this new variant is ongoing, and results are expected in the coming weeks.”

As of 2pm on Friday, 1,180 Covid-19 patients were hospitalised, of which 109 were in ICU. There were 116 additional hospitalisations in the past 24 hours.

Meanwhile, Minister for Health Stephen Donnelly has announced an acceleration of the country’s vaccination programme.

“By the end of this week, our plan is to have given over 40,000 vaccines to frontline healthcare workers and nursing home staff and residents, the plan is on target,” he said.

“We’re now going to accelerate our plan for residents and staff in long term residential care facilities – this means nursing homes as well as mental health and disability residential centres.

He noted Friday’s announcement by the European Commission in relation to the purchase of additional doses of the Pfizer/BioNTech vaccine was good news for Europe.

Commenting on the rise in ICU figures earlier, Professor Philip Nolan, chair of the Nphet Irish Epidemiological Modelling Advisory Group, tweeted: “We can turn this around, what we are doing now, and what we do over the coming weeks, will determine the course of some peoples lives, and the impact on our health services.

HSE chief operations officer Anne O’Connor said hospitals were “coping” at present but only because they had scaled back on other work. Growth in the number of patients requiring ICU beds was inevitable and it could reach 300-400, she warned.

All the hospitals had a crisis plan which they could activate to allow them “the capacity to surge into other areas”, Ms O’Connor told Newstalk Breakfast

The current situation was further hampered, she pointed out, by the fact that 2,700 staff were at present unavailable to work across acute and community services because they either had the virus or were close contacts.

She said the HSE was looking at developing systems that would allow patients schedule their appointments for the Covid-19 vaccine online.