Things are far from grand for Merkel’s latest coalition 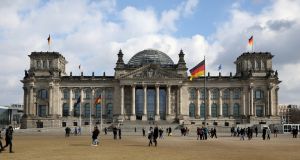 The unit of time in Germany is not the minute, the hour or even the day, but the week. And it’s 24 weeks –- nearly half a year – since German voters called time on Angela Merkel’s grand coalition of Christian Democrats (CDU/CSU) and Social Democrats (SPD).

But on Wednesday, after more twists than a Chubby Checker dance marathon, Germany will get yet another grand coalition. Some 24 weeks after voters gave the CDU/CSU and SPD their worst whipping since 1949, they are back in power. Nothing has changed and yet everything has changed in Berlin.

Germany’s third grand coalition since 2005, and Merkel’s fourth and likely final electoral term, is doomed to succeed. But, 13 years on, things are far from grand for this coalition.

A trade war looms with the US on steel, the backbone of Germany’s manufacturing industry and a threat to its buoyant economy; Brexit Britain is racing towards the abyss; and the remaining EU27, whether north-south or east-west, is drifting apart on an upcoming budget, refugees and security issues.

As Germany hands the political limbo baton on to Italy, it has been handed back its stability anchor with the expectations never higher.

The Merkel IV government is younger and, with seven out of 15 ministers women, more female than its predecessors.

But the grand coalition’s once three-digit parliamentary majority has shrunk to just 44 seats – half the size of the AfD parliamentary party, already setting a new and rough tone as leader of the Bundestag opposition.

The AfD’s arrival, and voter frustration at months of standstill, has increased pressure on the new-old government partners to score points against each other and quickly.

Merkel’s CDU has to overcome the opprobrium of signing up to a coalition agreement skewed in favour of the SPD, while the Social Democrat leadership, meanwhile, has to prove it is not back in power just to make up Merkel numbers.

Bavaria’s CSU, with an eye on crucial state elections in September, will push hardline security and immigration policy at odds with the SPD’s human rights priorities in its justice ministry.

The SPD environment ministry’s efforts to salvage Germany’s evaporating climate goals will come up against a pro-business CDU economic ministry.

The success – or failure – of her fourth term will hinge on Merkel’s relationship with two crucial SPD figures.

The first is with Olaf Scholz, the centrist SPD man who is returning to the Berlin cabinet table as finance minister. Like his predecessor Wolfgang Schäuble he is wary of deficit spending – and shares Merkel’s caution towards French euro reform proposals.

After years of austerity and trade surplus, however, the SPD minister has secured €45 billion to spend on mouldy schools and crumbling autobahn – and has blocked any red lines on EU reform proposals such as banking union and common deposit insurance.

Merkel’s second crucial relationship will be with Andrea Nahles. The East German protestant and western Catholic have worked closely at cabinet in the past, but the two woman face political pull from opposite directions.

Nahles has the unenviable challenge of reviving in power a party that has dropped below 20 per cent support. That means pushing policy that retains centrist voters while reaching out to left-wingers and voters who opposed an SPD return to power.

Her ministers have clear marching orders: back-to-the-roots policy that changes ordinary people’s lives for the better, whether in secure work contracts, affordable housing or care for the sick and elderly.

Even before he was sworn in as health minister Jens Spahn, an ambitious Merkel rival, stepped outside his brief on Saturday to warn against SPD talk of a “united states of Europe”, a European finance minister or common fiscal policy.

“Whoever pushes such utopias will divide Europe rather than unite it,” he wrote in Die Welt daily. “Take note: citizens’ scepticism is directed against the EU and its institutions, not the idea of European co-operation.”

His warnings chime with an EU discussion document on reform signed by Nordic and Baltic EU finance ministers, along with their Dutch and Irish colleagues.

“At the end of the day we have to find consensus on what we absolutely need, and not what we would like to have,” the eight ministers wrote, describing new structures – as pushed by Paris and Brussels – as wishful thinking until existing rules, particularly deficit rules, are met by all.

The complications of squaring this reform circle – combined with coalition talk distractions in Berlin – means that Franco-German proposals will now not materialise as expected at the March EU council.

After 171 days in limbo, Merkel will take her fourth oath as chancellor on Wednesday, as usual with the optional religious appendage “may God help me”. Germany’s wily chancellor will need help from all quarters to please everyone – internal party rivals, a wounded SPD, an impatient France and a divided EU – as the countdown begins for her departure from the political stage.