Aviation security under scrutiny after death of stowaway in London 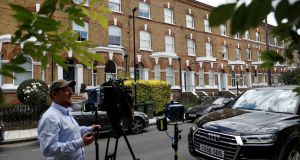 A house in Clapham, south London, into whose back garden the body of a suspected stowaway fell from a plane. Photograph: Peter Nicholls

There are calls for fresh scrutiny of aviation security as efforts continue to identify a man whose frozen body fell into a garden in London from the landing gear of a Kenya Airways plane.

Investigations have centred on Nairobi airport, where the man is believed to have concealed himself in the aircraft, but one aviation expert suggested airlines and plane manufacturers could take steps including fitting heat sensors to detect stowaways.

A bag, water and some food were discovered in the landing gear compartment after the flight arrived at Heathrow on Sunday. The man’s body was found in a garden in Clapham, south London, shortly before 3.40pm that day.

A postmortem is due to be carried out on the body, which was said by a neighbour to have landed a metre away from a resident who had been sunbathing.

A plane spotter who had been following the flight on an aircraft tracking app saw the body fall and arrived at the scene in time to give this information to the police.

Philip Baum, an aviation security consultant and a visiting professor at Coventry University, said the case illustrated the porous nature of airport security in developing countries.

“If someone can secrete themselves into the landing gear then it would seem possible that they can put in other things,” said Mr Baum, who added that stowaways often waited until an aircraft was taxiing to the runway before climbing in, rather than doing so at the departure gate.

“But it’s all very well to point the finger at Nairobi, which actually has some stringent security measures in place. I do think that there are other measures that could be taken, such as fitting heat sensors inside the wheel wells to detect the heat from human bodies,” he said.

Jomo Kenyatta airport in Nairobi, which has direct British Airways and Virgin flights to and from the UK, is based in a suburb near the business district.

Passengers must go through at least three tiers of security before reaching their planes, not including the large perimeter fence that encloses the airport. A first point of entry is a security screening yard some distance from the terminal, where passengers must alight from their vehicles and pass through a metal detector.

After a winding road of about 4km, passengers enter a second security check at their respective terminals, this time with their luggage. Finally, after checking in, they are directed to a body scan and carry-on security check.

There has been a bomb scare and an employee strike at the airport so far this year, while two Kenya Airports Authority managers died in the crash of Ethiopian Airlines flight 302 in March.

Employees from KAA and Kenya Airways said they were briefed about the stowaway incident in their morning staff meetings and had mostly heard about the story from social media or the local morning news. Others were unaware of it.

The airport was audited and received approval last year by officials from the US Transportation Security Administration before a decision on whether Kenya would be given a last point of departure status for transatlantic flights.

KAA had been asked in 2017 by the TSA to take corrective measures such as bolstering the perimeter fence and making staff changes that have led to security checks being handed over to regular police units.

It has been suggested the man who fell from the plane may have been working at the airport.

Four years ago, the body of Carlito Vale from Mozambique was found on the roof of a west London office building below the Heathrow flight path.

Another man was found unconscious in the undercarriage of the same British Airways plane, having survived freezing temperatures over the 12,800km flight from Johannesburg to London.

Stowaways risk being crushed or burned by the wheels as soon as they are retracted after take-off. At cruising altitudes of more than 35,000ft, oxygen deprivation can kill people hidden in the unpressurised wheel well. As temperatures plunge to -55, stowaways often die of hypothermia.

Records collated by the US Federal Aviation Administration suggest at most one in four stowaways survive, but many others die or fall in transit. – Guardian