The daughter of US president Donald Trump, Ivanka Trump, faced criticism after making contributions to a discussion between world leaders at the G20. 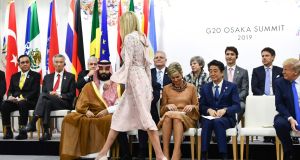 Ivanka Trump prepares to deliver a speech on women’s empowerment during the G20 Summit in Osaka on Saturday. Photograph: Brendan Smialowski/AFP/Getty Images

The abiding image from this year’s G20 summit will not be Donald Trump sharing another chuckle with Vladimir Putin. It is the clip of his daughter, Ivanka, inserting herself into an awkward circle of world leaders.

The video, released by the French government, shows varying expressions of tortured politeness as Ms Trump intrudes on a discussion between France’s Emmanuel Macron, Britain’s Theresa May, Canada’s Justin Trudeau and Christine Lagarde, head of the IMF. Lagarde, in particular, was unable to conceal her irritation.

What they were discussing is secondary. Macron made a point about social justice. May replied that people notice when the economy is brought into it. Ms Trump then interrupted with a non sequitur about how the defence industry is male-dominated.

[Washington Correspondent Suzanne Lynch talked to Foreign Editor Chris Dooley about the race to take on Donald Trump in 2020. To listen, click here]

The real point is that America’s self-named “First Daughter” is rarely out of the frame at global summits. Other Trump officials are almost invisible compared with Ivanka Trump, and her husband, Jared Kushner, the only two White House players who are thought to be immune from Donald Trump’s trademark phrase: “You’re fired.”

By contrast, leaders of patrimonial countries, such as Saudi Arabia, are very comfortable with IvankaTrump’s role. Mohammed bin Salman, Saudi Arabia’s crown prince, conducts much of his US communication over WhatsApp with Kushner.

The first son-in-law is also a favoured conduit for other leaders. Rex Tillerson, the former US secretary of state, recently disclosed that he had found out his Mexican counterpart was in Washington when he stumbled across him dining with Kushner.

Both Kushner and Ivanka Trump have a large array of portfolios and unparalleled Oval Office access on any topic. Kushner is in charge of the stillborn Arab-Israeli peace plan, which he launched in Bahrain last week with no Palestinians present.

Ms Trump launched a women’s entrepreneurship fund, which is run out of the World Bank and funded mostly by the Gulf states. She is also in charge of US workforce training. Her father said she was uniquely qualified to lead the US skills drive because she had created “millions of jobs”.

In reality, Ms Trump’s accessory companies, which she no longer directly runs, created hundreds of jobs, almost all of them in China. Both Ms Trump and Kushner were denied high-level security clearance by the White House personnel office. Donald Trump overruled the bureaucrats. It is thought that their extensive overseas business ties offered ample conflicts of interest. If you google “Ivanka Trump clearance”, the first item that comes up is cut price sales of Ivanka product lines.

The larger question is whether Ms Trump harbours political ambitions of her own. At the G20 summit in Hamburg two years ago, she sparked outrage when she briefly stood in for her father at a round table of world leaders. Her prominence has only grown since then. At the end of this latest summit, Ms Trump provided a video briefing of Donald Trump’s meetings with Japan’s Shinzo Abe and India’s Narendra Modi.

The US president has also been encouraging talk of dynastic succession. Last week he tweeted an image of Trump re-election banners starting from 2024 and escalating quadrennially into eternity. The meme ended with “Trump4Eva”. Whether the president was trolling his critics, or is genuinely nurturing a dynasty, is an open question.

Earlier this year, Trump said he had considered appointing his daughter as US ambassador to the UN. He had also thought about making her head of the World Bank. He said he pulled back because he would have been accused of “nepotism”.

Because neither job would have come close to offering the power Ivanka Trump and her husband already have, the president’s comments must be taken with a pinch of salt. Trump often treats politics as an extension of his business. The latter has always been tightly held within the family. His White House seems to be little different.– Copyright The Financial Times Limited 2019