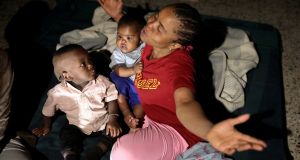 A migrant woman reacts inside the Anti-Illegal Immigration Agency detention centre in Tajoura, Libya after it was hit by shrapnel from an air strike. Photograph: Hani Amara/Reuters

An air strike hit a migrant detention centre in eastern Tripoli on Tuesday night, as the battle for Libya’s capital city continues to rage.

Witnesses said the target of the self-styled Libyan National Army’s air strike was a weapons store, which detained refugees and migrants have been forced to work in by guards since the month-old conflict began.

Hundreds of detainees were being held in a hall about 80 metres away, according to witnesses and Médicines Sans Frontières, which provides medical care in the Tajoura centre. A detained woman told MSF shrapnel came through the roof and almost hit her baby.

“Tonight they attacked . . . They bombed places so near, and the electricity is gone, we don’t know what will happen and the door is closed,” a refugee there told The Irish Times through messaging service WhatsApp.

“[It’s] really very frightening. Everyone is so worried.”

The strike came two days after renegade eastern general Khalifa Haftar ordered the Libyan National Army (LNA) to continue its offensive on Tripoli, saying Ramadan, which began on Monday, is a month of holy war.

“Officers and soldiers in our armed forces and the auxiliary forces, I salute you in this glorious days and urge you with your strength and determination to teach the enemy a greater and bigger lesson than the previous ones, as we’ve always known you to do, until we uproot it from our beloved land,” he said in an audio message.

More than 400 people have already been killed since the fighting began on April 4th, according to the World Health Organisation.

“Civilians must not be held in or near military locations, otherwise they become human shields,” said MSF on its Twitter account. “All parties have a responsibility to safeguard civilians, especially people in detention who cannot flee to safety themselves. Under no condition can they be targeted.”

Thousands of refugees and migrants remain trapped in detention centres close to the front lines. Many of them were previously returned to Libya by the EU-supported Libyan coast guard, after they tried to cross the Mediterranean Sea, and are appealing for evacuation to a safe country.

A UN call for a week-long ceasefire in Tripoli, to enable humanitarian aid to reach those who need it, failed earlier this week

During the past month, there has been shelling close to multiple Tripoli detention centres, while militias opened fire on refugees and migrants inside another centre two weeks ago.

“Migrants are targeted by everyone,” one detainee said.

Fayez al-Sarraj, the prime minister of Libya’s Tripoli-based, UN-recognised government, is currently travelling to meet European leaders and appeal for more support, while pushing the idea that a prolonged civil war could lead to hundreds of thousands of people crossing the Mediterranean to Europe.

A UN call for a week-long ceasefire in Tripoli, to enable humanitarian aid to reach those who need it, failed earlier this week.

Meanwhile, refugees and migrants detained in the city are pleading to be moved away from military bases. “We need urgent help now,” said an Eritrean in a detention centre in south Tripoli. “The situation of the clashes is deteriorating. We are afraid of being targeted.”