Son of former European Commissioner, Michel is seen as cool-headed and an effective conciliator 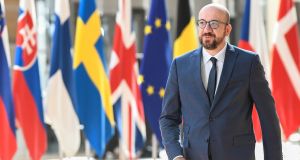 Charles Michel (43), who is being proposed to replace Donald Tusk as president of the European Council, effectively the shop steward of the EU leaders, currently heads the Belgian caretaker government.

He is the youngest Belgian prime minister since 1845, and was set to be in office for a while as the country’s parties engage in the interminable process of agreeing a new coalition.

The Belgian system requires a government to be made up of parties from across the Flemish/Walloon linguistic divide, a process that inevitably means strange ideological compromises, and has led in the past to Belgium being government-less for years.

Michel leads the Francophone-liberal Mouvement Reformateur (MR), which represented only 25 per cent of the French-speaking population when he entered coalition in 2014. He was roundly criticised and, some say, politically compromised for joining in a coalition with the right-wing nationalist Flemish NVA party and two other parties representing the Flemish community.

His party played very much a minority role – although with him as prime minister – and he appeared to have endorsed the NVA’s strongly anti-migrant policies.

In 2018, however, the NVA reversed its position on signing up to the UN Global Compact for Migration, which proclaimed basic rights for migrants, having previously committed to doing so. It broke with the government and Michel formed a minority administration until the elections in May of this year.

He is seen as cool-headed and an effective conciliator, although a veteran Belgian journalist described his political style at home and in the European Council as strikingly different. On the European stage, the journalist suggested, Michel is a bolder politician, more willing to stand up for his views, while domestically he has been more submissive and likely easily to stomach objectionable policies from allies.

He was one of the first at EU level to respond to eastern European opposition to burden-sharing on migration by suggesting the EU was heading for a “two-tier” union with the reluctant states such as Poland losing some rights. The EU could not be seen simply as an ATM, he said.

His negotiating style is based as the “plate theory” – at a dinner guests can be expected to be presented with numerous plates of food; they will be satisfied if they find some of what they like but everyone will get something, even if it is not all of what they want.

In December 2007, Michel became the Belgian minister of development co-operation and he has played a significant role in the EU, raising development issues and arguing for the necessity of a new deal with Africa.

He is the son of former EU commissioner and MEP Louis Michel. He qualified as a lawyer at the Brussels bar and is fluent in Dutch and English in addition to his native French.