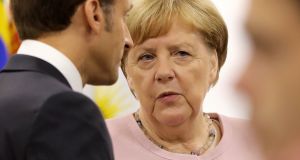 The package of top jobs announced by EU leaders represents the continued domination of the institutions by pro-EU partiesand reinforces the Franco-German pre-eminence in its leadership.

It also provides important guarantees for the south and smaller countries in representation at the top tables for Spain and Belgium.

In rejecting the option of commission vice-president Frans Timmermans as its president, the leaders have also consciously sought to placate the wayward eastern Europeans in the Visegrád group of four Central European states – Poland, Hungary, the Czech Republic and Slovakia – along with Italy. They made clear his nomination would be seen as further dividing and alienating them from the mainstream.

Council president Donald Tusk has been particularly sensitive to the issue and spent much of the last three days trying to build a consensus rather than putting nominations to the vote. But in Belgium’s Charles Michel as council president, they will find a president no less determined to uphold the treaties and the rule of law.

The difficult task of providing gender, geographic and party balance will not altogether please MEPs who will bitterly complain at what is effectively the demise of the Spitzenkandidat system, meant to give parliament a more direct say in the nominations.

The leaders will now press their respective political groups on the need for German defence minister Ursula von der Leyen’s ratification as commission president in the parliament as part of a balanced package.

All three of the main parliamentary groups, the EPP, the Socialists and Democrats (S&D), and the liberals, now Renew Europe, saw their candidates rejected by leaders. Some MEPs may wish to exercise their treaty right to “elect” the president by at least delaying the nominations.

The decision to give commission vice-presidencies to two of the names, Timmermans, of the socialists, and Margrethe Vestager, of Renew Europe, may sugar the pill somewhat, but reports from Strasbourg suggested that socialist MEPs were particularly unhappy with their party’s “meagre” prize in the shareout, with “only” the high representative job for Josep Borrell.

Diplomats hope Spanish socialist prime minister Pedro Sanchez’s support for the package will swing it. Not least because the socialists were never as invested in the spitzenkandidat system as the EPP.

In addition to France and Germany, whose leaders hatched the deal, she quickly won support from the four Visegrád countries and Italy, which had all been determined, to block Timmermans. His robust campaign to discipline Poland and Hungary over rule-of-law breaches, although mandated by the commission and the council, had seen him particularly demonised.

Macron had been determined that at least one job would go to France, and when it became clear that Michel Barnier, the EU chief negotiator, was a non-runner, Christine Lagarde became the country’s standard-bearer for the job of president of the European Central Bank.

The French politician and anti-trust and labour lawyer has been managing director of the International Monetary Fund (IMF) since 2011. She has served as French finance minister and in the ministries of agriculture and commerce. She was a member of Les Republicains, the Gaullist party affiliated to the EPP.

The presidency of the ECB is not, however, regarded as a political post. The main requirements for the job are competence and banking experience.

Borrell, a member of the Spanish socialist party (PSOE) and former president of the European Parliament, has been minister of foreign and European affairs since June 2018. Although he ran as top of the socialist list for the European elections in which the party made important gains, Borrell resigned his MEP seat immediately to continue in the foreign ministry.

He will be ratified as part of the full new commission team which goes to MEPs for their approval as a block.

Sergei Stanishev,  currently president of the Party of European Socialists, and a member of the European Parliament since 2014, will be asked to share his five-year term with the disappointed Weber. Stanishev was also prime minister of Bulgaria between 2005 and 2009.