Wadowice, near Krakow, birthplace of Karol Wojtyla on May 18th, 1920, draws crowds 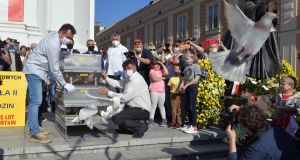 Celebrations to mark the centenary of the birth of St John Paul II in his native Poland were overshadowed on Monday by fresh allegations of clerical sex abuse against children – and church cover-up.

Crowds gathered in the small town of Wadowice, near Krakow, where Karol Wojtyla was born on May 18th, 1920, to honour their famous son.

“Karol Wojtyla was one of the most important figures of the 20th century,” said Polish president Andrzej Duda in a letter read to worshippers at Mass. “His teaching and testimony still touch the hearts and minds of millions of people.”

In Rome, Pope Francis remembered the Polish man who served as pope from 1978 until his death in 2005. In his morning Mass, Pope Francis said that, “One hundred years ago the Lord visited his people.”

As millions remembered the Polish pontiff, a key figure in the country’s peaceful transition to democracy in 1989, nearly five million people in two days have watched the YouTube documentary Hide and Seek.

The second documentary by Polish filmmaker Tomasz Sekielski on child abuse within the Catholic Church, Hide and Seek tells of two brothers who were alleged victims of a priest who was shielded by his bishop.

The film follows their journey to confront the priest, discovering other alleged victims of the priest, Arkadiusz Hajdasz. Approaches to church officials are stone-walled while the bishop who allegedly failed to intervene does not even deny the charges.

Last year, Sekielski’s first documentary, Tell No One, was viewed more than 40 million times online. It prompted an internal church investigation and an apology from Archbishop Wojciech Polak, the Polish primate.

He expressed concern over the allegations made in the new documentary and said he was referring the matter to the Holy See for investigation.

“The film Hide and Seek which I’ve just seen, demonstrates that the standards of protection of children and youth within the church were not observed,” he said, criticising the treatment of victims and their families and a lack of follow-up by church authorities.

He urged anyone with information about alleged clerical abuse to come forward and called on priests, nuns, parents and teachers “not to follow the false logic of concern for the church which results in hiding sexual offenders”.

The archbishop said he had passed on a request via the papal nunciature to initiate investigative proceedings in the Holy See, as mandated by Pope Francis a year ago.

Documentary maker Sekielski said there was a consistent pattern in Polish abuse cases, with survivors “deprived of state and church support”.

The filmmaker has promised a third documentary dedicated to the “role of John Paul II in the dissimulation of crimes committed by priests”.

The new documentary highlights the close working relationship between Catholic authorities and Poland’s national conservative Law and Justice (PiS) government. Backing from the pulpit has been a key component of two successive general election wins for PiS.

The film explains how an official justice ministry rule requires prosecutors to seek permission from their superiors before gathering material from church institutions as part of an investigation.

In January of last year, the general state prosecutor’s office issued a letter to all state prosecutor offices to “avoid an antagonistic approach” when seeking documents from Catholic institutions.

During such investigations, the film points out, Catholic Church officials are given access to complete case documentation, allowing them prepare the most effective line of defence.

Archbishop Polak said the close co-operation between the church and state prosecutors was “much needed and beneficial for the protection of minors and for the punishment of the perpetrators”.