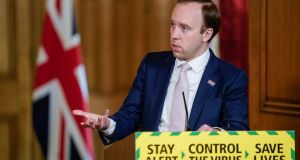 The prime minister’s official spokesman played down concerns that Ireland could be used as a back door into Britain and that Dublin has not reciprocated the exemption for visitors from Britain.

“It’s the sort of question that we’ll be able to address when we set out the full details of the policy but we’re very used to having a Common Travel Area and ensuring that the UK’s rules can be properly enforced with the Common Travel Area in mind,” the spokesman said.

The Common Travel Area’s freedom of movement between Britain and Ireland only applies to citizens of the two countries and the system has long been applied asymmetrically, with passports checked on entry to Dublin but not in London. Taoiseach Leo Varadkar last week ruled out exempting visitors from Great Britain from Ireland’s quarantine, which applies regardless of nationality.

Anyone in Britain over the age of five who has coronavirus symptoms is now entitled to a test, health secretary Matt Hancock has told MPs, as the government targets 200,000 tests a day. But progress on developing a contact tracing app has slowed and it is now not expected to be launched until next month.

Mr Hancock announced the expansion of the testing programme as Britain’s death toll from the virus reached 34,796, an increase of 160 since Sunday – the smallest daily increase since the lockdown began almost two months ago.

The health secretary said the government had recruited more than 20,000 people to do contact tracing, which Britain abandoned in the early weeks of the epidemic.

“I can confirm that we have recruited over 21,000 contact tracers in England. This includes 7,500 healthcare professionals who will provide our call handlers with expert clinical advice. They will help manually trace the contacts of anyone who’s had a positive test and advise them on whether they need to isolate,” he said.

Most of the contact tracers without a medical background are call centre workers hired by the outsourcing company Serco and who are given a day’s training. Deputy chief medical officer Jonathan van Tam said manual tracing was more important than the contact tracing app but he said the turnaround time for testing must be improved.

“We need to do it bigger and faster, and as fast as we can,” he said.