London Letter: Early casualties of Aids in the 1980s were mostly in their 20s and 30s 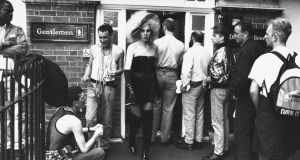 There was a sharp bite in the air but brilliant sunshine and an easing of the lockdown brought hundreds of us to Brompton Cemetery, singly and in pairs. A procession of pushchairs, dogs, children, beatific old ladies, solemn old gentlemen and silent young couples moved beneath the trees along the Central Avenue to the lovely, preposterous Grand Circle, modelled on St Peter’s Square in Rome.

One of the “magnificent seven” large, private cemeteries built around London in the 19th century, this has always been as much a pleasure garden as a graveyard. Victorian families came here for picnics and when Earls Court was a centre of London’s gay scene in the late 20th century, it was a lively cruising ground.

At the heart of the Earls Court scene was the Coleherne, a bar that attracted the leather crowd, many of whom would arrive by taxi in full motorcycle leathers with a helmet in a carrier bag. Few owned a bike. A favourite haunt of Freddie Mercury and Rudolf Nureyev, it was run during the 1970s and early 1980s by Pat and Breda McConnon from Tipperary, who went on to run other gay pubs around London.

The Coleherne, which is now a gastropub under another name, had lost some of its allure by the time I first went there, partly because its customers had been prey to not one but three serial killers. But I knew all about it from Andy, a former regular at the bar who moved to Berlin in the 1980s and worked in a cafe where I met my friends every day.

It was in the Coleherne that Andy met the German boyfriend who took him back to Berlin, a tall, taciturn figure with a thick black moustache who wore his full leather costume day and night. We called him the Queen Mary because of the way he swept in like an ocean liner and made a great clatter positioning himself on a stool next to the bar as if he was coming into dock.

We all thought the Queen Mary was an old misery but Andy looked at him as if he was the start and the finish, the very thing itself, and we did our best to be friendly. The truth is we were jealous because if Andy was talking to him, he wasn’t listening to us.

The old lecher who ran the cafe always had two men behind the bar – a young, handsome one for the customers to flirt with and a slightly older, motherly one like Andy to listen to their troubles. The troubles were plenty and as the months went by, one customer after another would receive the same, bad news.

“His ticket is booked,” the Brazilian drag queens would say.

Shame and fear made many keep a secret of their diagnosis and they often disappeared without a word, going back to families from whom they had long been estranged or just retreating from the world.

When one of our group swore after he got the news that he had never submitted to any of the practices that transmitted the virus, we called it his Immaculate Infection. It killed him all the same.

It killed Walther who went to the cruising sauna every night including Christmas Day and New Year’s Eve and never understood why he didn’t have a boyfriend. It killed Klaus and Andreas who stood straight-backed and unsmiling behind the bar of the city’s smartest restaurant and slipped us free drinks when nobody was looking.

It killed Dirk, who blushed dark pink when anyone told him they liked him, and everyone did. It killed half the staff and many of the customers in our cafe. It killed Andy and a little later it killed the Queen Mary too.

Coronavirus has killed more people in Britain in three months than HIV/Aids did in nearly four decades and while one disease runs its course within weeks, the other took years. Coronavirus has hit the over-80s hardest but the early casualties of Aids, which almost always ended in death until 1996, were mostly in their 20s and 30s.

There are some echoes of the early days of Aids, however, notably in the fact that those infected with the virus are perceived as a danger to the doctors and nurses who must wear elaborate protective clothing when treating them. And like coronavirus patients today, many people with Aids were separated from those closest to them in their last days, often forced to choose between family and friends.

The Chelsea and Westminster Hospital, a few steps from Brompton Cemetery, is home to Britain’s first specialised HIV clinic, which brought a more humane approach to treatment when it opened in 1988. The hospital entrance is decked with five giant, heart-shaped garlands and the staff inside have found ways of keeping coronavirus patients in touch with their families, showing great kindness to those in their care.

Walking past the other day, I thought about the almost 300 people who have died of coronavirus there since this epidemic began and of the friends who died of the other virus long ago. And I thought about the sweet, raspy smell of disinfectant, the flicker and hum of machines in the night, the murmur of grave voices behind masks, the soft smack of rubber soles retreating, the anguish, the loneliness and the dread.