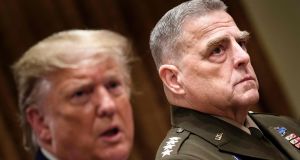 Syria continues to suffer from contradictory external interventions which create confusion and prolong the eight-year war.

While US president Donald Trump announced last month that all US forces would withdraw from Syria since Islamic State has been defeated, the Pentagon has declared that 600 troops will remain in the east to maintain anti-terrorism operations against Isis remnants.

“There will be less than 1,000 for sure,” said Gen Mark Milley, chairman of the joint chiefs of staff, referring to the number of soldiers Trump ordered to leave the Syrian-Turkish border zone in the north. Without mentioning Syrian oil fields, Milley said Isis fighters could re-emerge if pressure was not maintained.

Milley was trying to counter public relations damage caused by Trump when he stated, “We want to bring our soldiers home. But we did leave soldiers because we’re keeping the oil. I like oil.”

The Pentagon promptly announced revenues from Syria’s oil would be paid to US-backed Syrian Democratic Forces (SDF), dismissing Trump’s suggestion that the proceeds could be used to reimburse the US for battling Isis. Appropriation of oil revenues could count as a war crime.

Although the Pentagon has said US forces would use force only in self-defence, Trump told reporters last month: “We may have to fight for the oil. It’s okay.”

Since US troops equipped with heavy armoured vehicles have been deployed on this mission, it appears to be directed against the Syrian army and its Russian allies instead of Islamic State fugitives. Suppressing them requires lightly armed mobile units.

Meanwhile, Turkey and Russia have conducted joint helicopter patrols of the Turkish-Syrian border to make certain SDF fighters have withdrawn and do not pose a threat to Turkey.

Some 200,000-300,000 civilians have fled this area following the Turkish invasion prompted by Trump’s partial withdrawal of US troops and abandonment of the US-allied SDF.

Outside Ankara’s “safe zone”, Turkey’s proxy militias have attacked Syrian government forces near the strategic town of Tal Tamir, inhabited by Kurds, Arabs and Assyrian Christians. As fighting raged all round on Monday, armoured Bradley vehicles flying the US flag drove through the strategic town, which is located at the junction of the main highways to the two chief cities in northeastern Syria, Qamishli and Hasakeh.

Northwestern Idlib province, dominated by al-Qaeda’s Hay’at Tahrir al- Sham remains under attack by Syrian government forces and Russian warplanes although Turkey, while partnering Russia in aerial patrols in the northeast, continues to provide the jihadis with guns and other aid.

In Geneva, UN-brokered talks on post-war governance involving government, opposition and civil society delegations have been unexpectedly positive, a core group of 45 has been appointed to work on constitutional arrangements and is set to meet again on November 25th.