Islamic State re-emerges as guerilla force in Syria and Iraq 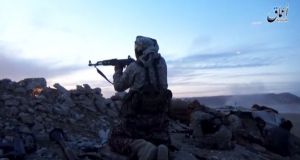 An Islamic State fighter fires a weapon in this still image taken from a video said to be taken on the outskirts of Palmyra, Syria, and uploaded on March 21st, 2016 by an agency affiliated to the Islamic State terror group. Photograph: Reuters

Islamic State is carrying out a rising number of kidnappings, killings and bombings in Iraq and fighting fiercely in Syria as the extremist group returns to its insurgent roots having been driven out of almost all the territory it once controlled.

A recent US defence department report said an effective clandestine Islamic State organisation “appears to be taking hold”, four years after the group controlled swaths of Syria, as much as a third of Iraq, and declared a caliphate.

A suspected Islamic State roadside bomb in Mosul killed at least three schoolchildren late last month and a car bomb killed at least five people in the city of Tikrit in mid-November. Attacks in oil-rich Kirkuk province so far this year have more than doubled from 2017, according to the Washington-based Center for Strategic and International Studies.

Between 2014 and 2017 Islamic State, also known as Isis, was driven out of areas it controlled in Iraq by the western-backed Iraqi army alongside Kurdish forces and Shia militias, many supported by Iran. Western jets also pounded Isis-held territory, reducing swaths of cities to rubble.

But its re-emergence as a guerrilla force signals the continued threat posed by a group that inspired deadly terrorist attacks in Europe and shocked the world with massacres and beheadings in Iraq and Syria and the systematic sexual enslavement of women.

Kino Gabriel, spokman for the Syrian Democratic Forces (SDF), a key US ally fighting Islamic State, said the group was taking advantage of persistent political instability in Syria and Iraq. “Our estimation of Isis’s power was wrong. We realised that there are more Isis fighters than we thought,” he said.

Islamic State’s revival is prolonging the deployment of US troops in Syria, where some 2,000 personnel are stationed. Trump administration officials have recently pledged that American soldiers will remain in the nation until the “enduring defeat” of Islamic State and the removal of Iranian forces and Tehran’s proxies.

It also suggests that the organisational structure that helped the militant group to grow has not been eliminated and that weakened states remain hard-pressed to check it.

Although Islamic State has lost the oilfields in Iraq and Syria that helped it become the world’s richest terrorist group, analysts say it is still well-funded, earning revenue from extortion and front companies including car dealerships to currency exchanges.

In Iraq, Islamic State has the potential to undermine the new government’s efforts to consolidate improvements in security and deliver badly needed economic development – particularly in mostly Sunni areas devastated by the battle with Isis.

Yahya Rasool, spokespman for Iraqi army’s Joint Operations Command, said: “Our war on Isis today is an intelligence war, not a military war. We are searching and raiding their hide-outs.”

Civilian casualty numbers in Iraq have been falling this year. The UN recorded 41 people killed in November, the lowest total since they started compiling the data in November 2012.

But Michael Knights, senior fellow at the Washington Institute, said his research showed a pattern of Islamic State targeting community leaders. “That affects every single person in that village,” he said. “They know Isis can walk into that village, kill the most important person there and leave.”

Local chiefs are also targeted partly because they can identify Islamic State members attempting to return to their communities, said an Iraqi security professional.

Iraqi security forces, made up of Iraq’s regular army as well as irregular militias or so-called popular mobilisation units, are struggling to adapt to Islamic State’s shift to guerrilla tactics, said Knights.

“It’s a lot to ask of a really exhausted army to suddenly become and an enlightened counter insurgency force,” said Knights. “For this reason we’re going to see a couple of years where Isis is [one step ahead] of the Iraqi security forces”.

In Syria, Islamic State still controls a pocket of territory in the Euphrates valley close to the Iraqi border, where it has inflicted heavy casualties on the SDF, which is fighting to expel the rebels in the US-led coalition’s “Operation Roundup”.

The terrorist group killed nearly 80 fighters from the SDF around the town of Hajin in a battle at the end of last month, the SDF’s biggest loss in a single day of fighting, said the Syrian Observatory for Human Rights, a monitoring group.

Brett McGurk, the US’s top diplomat for the Global Coalition to Counter Isil [Islamic State] stronghold of the terrorist group.

The SDF’s anti-Isis offensive has been complicated by regional geopolitics. Turkey has established a buffer zone through its own proxies in northwestern Syria to keep Kurdish rebels away from its borders. Washington is limiting the weaponry it gives to its rebel allies to placate Ankara, which considers some Kurdish fighters aligned with the US as terrorists.

“That’s one reason why [the SDF] have not been as successful recently against [Islamic State] as they have been in the past,” James Jeffrey, US special representative for Syria engagement, said this month. “[The SDF] do not have tanks. They do not have artillery.” – Copyright The Financial Times Limited 2018