Iraqi violinist returns to Mosul to play concert at shrine 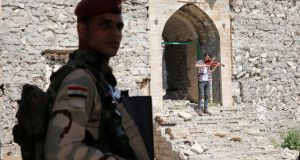 A member of the Iraqi security stands guard as Ameen Mukdad, a violinist from Mosul, performs at Nabi Yunis shrine in the eastern part of the city. Photograph: Muhammad Hamed/Reuters

A 28-year-old Iraqi violinist who was forced to go into hiding when the Islamic State terror group took control of his home city of Mosul has returned there to play a concert.

Ameen Mukdad played I am Free and other compositions covertly composed while living under the rule of Islamic State, also known as Isis or Daesh, in the ruins of the massive shrine in ancient Nineveh.

The shrine dedicated to Nabi Yunis, the Prophet Jonah, is venerated by Muslims, Christians and Jews and was one of the first to be wrecked by the terror group after they occupied Mosul, Iraq’s third-largest city, in June 2014.

An operation to retake Mosul, led by the Iraqi government with the support of allies including the US, began in October. The Iraqi forces have retaken control of the eastern part of the city, but Islamic State retains control of some districts in the west.

Referring to the shrine where he held the concert on Wednesday, Mukdad said:“This is a place for all, not just one sect. Daesh represents no religion but is an ideology that suppresses freedom. Everything about Daesh is wrong.”

By playing his music there, he sought to send a message to “all ideologies which restrict freedom that music is a beautiful thing”.

He advertised the concert on social media, attracting a small audience. The concert went on for an hour despite the intrusion of background noises from fighting in Mosul’s Old City.

Mukdad remained in Mosul after the Islamic State conquest and continued to play in defiance of the group. His fellow musician and friend Hakam Anas said, “We tried persuading him he could get killed if he kept playing.” Mukdad then went underground for six months after fighters stormed his house and destroyed his instruments.

He left for Baghdad once the city’s eastern districts were recaptured by government forces. While recuperating from his ordeal, he was contacted by an anonymous activist and music lover who writes the Mosul Eye blog which has, at great risk to himself, informed outsiders about life in Mosul under the occupation.

Once he had become acquainted with Mukdad, the blogger asked, “Would you promise to play music in Mosul one day?” He replied, “This has been my dream.”

Inspired by music recorded by the Israeli-American violinist Itzhak Perlman, Mosul Eye booked a flight for Mukdad to Irbil in the Kurdish region and, with the help of the Iraqi army, arranged a convoy to take him and claranetist Thamir Khalil to Mosul where they were greeted by a crowd.

The site of the concert was chosen specifically because it symbolises the unity of the three Semitic religions, a relationship Islamic State scorns. After postingfootage of the concert on Twitter, Mosul Eye wrote, “I am laughing and crying at the same time.”