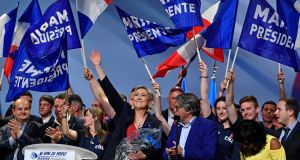 Marine Le Pen promised to protect France from Islamic fundamentalism, “waves of immigrants”, terrorism and the ravages of “savage globalisation” at her last rally before the first round of the French presidential election on Sunday.

“I want to launch a message of national insurrection, an insurrection of the undefeated, to give France back to her people,” the candidate of the extreme right-wing Front National (FN) declared at the outset of a long speech in Marseille in which she returned to the party’s fundamentals.

Security was tight, a day after police arrested two young Frenchmen who had amassed weapons, explosives and an Islamic State flag in a Marseille apartment. Le Pen’s supporters claimed the jihadists wanted to kill her.

Hundreds of gendarmes and police in riot gear blocked roads around the Dôme auditorium, where the rally took place. Police skirmished with anti-fascist groups nearby in a cloud of tear gas. Le Pen promised to “dissolve these extreme left militias who threaten our police”.

I spoke to two men from Alain Soral’s Égalité et Réconciliation, a far-right fringe group that supports Le Pen. “We are more intransigent than the FN in opposing the Masonic-Judeo-Zionist clique,” one said, telling me “it will come out soon” that “[the Israeli intelligence agency] Mossad killed Princess Diana”. Le Pen has tried for years to dissociate the FN from anti-Semites and conspiracy theorists.

Virginie (55) was bused in with other supporters from Montpellier. “I saw our economy dry up, companies and factories closing, crushed by taxes and social charges,” she said. “At first, I didn’t understand. It’s a European strategy to destroy our enterprises, to create unemployment.”

Virginie believes that “a handful of people who rule the world” want to enslave the population through debt. The same plotters organise wars and displace populations for their own amusement and profit. She cited the International Monetary Fund and the investment bank Goldman Sachs. “Marine”, as she is called by FN supporters, would defy them by pulling France out of Europe.

Le Pen’s niece and sometime rival, Marion Maréchal Le Pen, who at age 27 is the youngest deputy in the National Assembly, took to the podium.

Wearing a skin-tight, short white dress and high heels, Maréchal Le Pen attacked Christian Estrosi, the conservative former mayor of Nice who defeated her in the race for president of the Provence-Alpes- Côte-d’Azur region in 2015. She accused Estrosi of violating the 1905 law on separation of church and state by allowing the use of taxpayers’ money the build mosques. When he looks out the window, she claimed, Estrosi “sees djellabas and burkas. He has only himself to blame”.

A drum roll, and Marine Le Pen strolled onto the stage in her signature navy blue suit. “Bravo for being here, despite legitimate fears after yesterday,” she said, referring to the arrest of the two jihadists.

“We are living through the end of the cycle,” Le Pen said. “Under our very eyes, the socialist and [conservative] Républicains leaders have self-destructed. They found substitute candidates, the stringy Macron…”. Emmanuel Macron, the former protégé of President Francois Hollande, who is standing as an independent centrist, is slightly ahead of Le Pen in opinion polls.

I hitched a lift to the metro station with FN supporters. A kilometre or two from the auditorium, we passed three women in headscarves and long robes. “It’s provocation! They’re doing it on purpose,” the woman beside me exclaimed.

“I am the only candidate who can overthrow the oligarchy that makes sure nothing changes,” Le Pen continued, denouncing all other candidates as “immigrationists”. Some 20 bodyguards stood at intervals below the stage, their eyes sweeping the crowd.

“Savage globalisation has organised the world like a big supermarket... The only thing that matters are the profits of the caste. France isn’t for sale. The French aren’t for sale,” Le Pen said.

“The people who want to take down our borders would not leave their doors and windows open. The only freedom left to us is to witness waves of immigrants settling in our country. They are transforming France into an enormous squat. The first thing I will do is reinstall the doors and windows of our house and give you back the keys.”

Le Pen used to say she would limit legal immigration to 10,000 per year, compared to more than 200,000 at present. Now she says she will stop all immigration the moment she is elected. France has in fact received fewer migrants per capita than most EU countries.

“Submersion by migration wipes out everything in its passage,” Le Pen continued. “How long can we live like French people in France, when whole neighbourhoods are being transformed, when women are being forced to wear the veil?”

The election was, quite simply, “a choice of civilisation”, Le Pen said. “I will be the president who protects you... We are patriots defending our country... A multicultural society is a multi-conflictual society.”

The crowd cheered wildly when Le Pen promised to reserve housing, education, jobs, medical care and other benefits for the French. “I don’t see why we should subsidise the fertility rates of other countries,” she said. She promised to defy the EU by ending the reunification of immigrant families.

Le Pen attacked the former prime minister Manuel Valls for saying the French would have to learn to live with the threat of terrorism. “We will never resign ourselves to living with this poison.”

The men arrested in Marseille on Tuesday, like most of those who staged attacks over the past two years, were on the “S” (for security) list of suspected radicals. More than 10,000 men on the “S” list constitute “an army of shadows who want us to live in terror”, Le Pen said. Police often have little or no evidence against the suspects, but Le Pen nonetheless promises to deport all foreigners on the list, and prosecute those who hold only French nationality for collaborating “with the enemy”.

To solve the problem, Le Pen said, one must end the “sieve” of the Schengen agreement, which allowed terrorists to cross EU borders “like tourists”. Above all, “We have to attack the root of evil, the lawless zones that are shyly referred to as ‘the problem of the banlieues’.. All France is become a huge lawless zone.”

The presidential candidate promised to end “fundamentalist brainwashing” by closing “radical mosques” and expelling “preachers of hatred”. She would ban “the beach head of Islamists”, the peaceful Union of Islamic Organisations in France.

“To transform our ideological victory into a political victory, I need you,” Le Pen concluded. “I need the highest score possible in the election.”

I hitched a lift to the metro station with FN supporters. A kilometre or two from the auditorium, we passed three women in headscarves and long robes. “It’s provocation! They’re doing it on purpose,” the woman beside me exclaimed. She did not believe polls indicating Le Pen would be defeated by any of three other leading candidates in the second round of the election on May 7th.

“If she doesn’t win, we’ll have to leave the country or take up arms, because there’s going to be a civil war,” Gérard (68) predicted. “Look what happened in Cologne ,” he said. “Their imams say it’s women’s fault for wearing short skirts and perfume. Already, all our slaughterhouses have been converted to make halal meat. They are taking over the country. There are already 200 places in France that are ruled by Sharia.”