White House on the backfoot over North Korea ‘armada’ claim 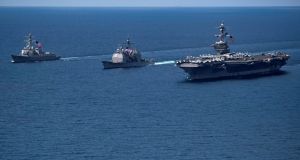 The USS Carl Vinson, accompanied by, from left, the USS Michael Murphy and Lake Champlain, in the Indian Ocean on April 14th. Photograph: US department of defence via the New York Times

The White House stood accused of misleading the media and the world on Wednesday as it emerged that a fleet of ships dispatched towards North Korea was in fact heading in the opposite direction.

Ten days ago the US navy announced that a group of Singapore-based vessels, led by the USS Carl Vinson, had been diverted north towards North Korea and away from their scheduled route to Australia, amid fears in Washington that the totalitarian state was preparing to launch a sixth nuclear missile test.

On April 11th, defence secretary James Mattis said that the ship was “on the way up” to the Korean Peninsula. A day later, president Donald Trump told Fox News that the US was sending a “very powerful” armada to North Korea.

But it has emerged that the fleet in fact sailed south to take part in the scheduled training exercise with the Australian navy, although a scheduled port call in Fremantle, Australia was cancelled. On Tuesday, the ships switched course north towards the western Pacific but were not expected to reach the seas off the Korean Peninsula until next week.

Speaking on Wednesday, White House press secretary Sean Spicer dismissed suggestions that the Trump administration had been misleading, arguing that the fleet was ultimately heading to the region. “The president said that we have an armada going towards the peninsula. That’s a fact,” he said.

The controversy has threatened to overshadow vice-president Mike Pence’s 10-day visit to Asia and Australia, which is taking place at a time of tension between the United States and the secretive nuclear state.

Speaking aboard the USS Ronald Reagan, a US aircraft carrier based in the Japanese port of Yokosuka, Mr Pence restated the United States’s willingness to respond to any nuclear challenge and said that all options are on the table in dealing with Pyongyang.

“Those who would challenge our resolve or readiness should know, we will defeat any attack and meet any use of conventional or nuclear weapons with an overwhelming and effective American response,” he said, pledging to increase the US presence in the Asia Pacific region in the coming years and suggesting that Japan will assume “a larger role and responsibility in our alliance in the years ahead”.

In Washington, speculation was growing that the United States may be considering reimposing sanctions on Iran, a move that would fit with Mr Trump’s election campaign promise to abandon the 2015 nuclear deal negotiated by his predecessor Barack Obama and western powers.

Mr Spicer confirmed that the president had ordered a review of the Iran deal.

The confirmation came hours after US officials announced that Iran had fulfilled its requirements in the latest review the deal, as secretary of state Rex Tillerson stressed its continued role as a sponsor of terrorism.

“Iran remains a leading state sponsor of terror, through many platforms and methods,” Mr Tillerson said. “President Donald J Trump has directed a national security council-led inter-agency review of the joint comprehensive plan of action that will evaluate whether suspension of sanctions related to Iran . . . is vital to the national security interests of the United States.”