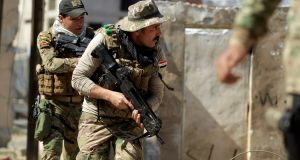 Their operation to retake the eastern bank of the city, launched in mid-October with support from a US-led coalition, took more than three months. The offensive to recapture west Mosul got underway less than three weeks ago.

“Despite the tough fighting... we are moving ahead in persistence to finish the battle for the western side within a month,” Lieut General Talib Shaghati told Reuters at a conference in Sulaimaniya.

The few thousand militants still fighting in west Mosul are overwhelmingly outnumbered by a 100,000-strong array of Iraqi forces, but their ruthless tactics east of the Tigris river late last year enabled them to hold out much longer than the government’s initial optimistic predictions.

Mosul is by far the largest city which Islamic State has held in its cross-border, self-declared caliphate in Iraq and Syria. It has been losing ground in both countries, with three separate forces, backed by the United States, Turkey and Russia, advancing on its Syrian stronghold of Raqqa.

In Mosul, CTS forces recaptured the Moalimin and Silo districts on Thursday, according to the commander of the campaign Lieut General Abdul Ameer Rasheed Yarallah.

Inside the city, CTS are fighting alongside the federal police and the elite interior ministry Rapid Response force, which earlier this week recaptured the provincial government headquarters and the Mosul museum.

A federal police colonel said on Thursday there were skirmishes close to the museum, where the militants filmed themselves destroying priceless statues and sculptures in 2015.

“The frontline is just beyond it,” said Lieut Colonel Hammeed Habib of the Rapid Response forces. “There are snipers stationed in tall hotel buildings on a road beyond that line”.

The Iraqi army’s ninth division and Shia paramilitary forces said on Wednesday they had cut the main road between the city and the Islamic State stronghold of Tal Afar to the west, tightening a noose around the city.

There is little doubt Iraqi forces will eventually prevail over the militants, who are both outnumbered and overpowered, but even if it loses Mosul, Islamic State is expected to revert to their insurgent tactics of old.

On Wednesday, bomb blasts ripped through a wedding party near Tikrit, which was recaptured by Iraqi forces in 2015, killing more than 20 people.

The jihadist group has lost most of the cities it captured in northern and western Iraq in 2014 and 2015. In Syria, it still holds Raqqa city as its stronghold, as well as most of Deir al-Zor province.