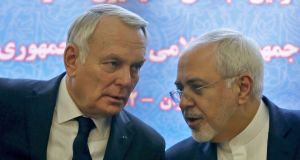 Iran’s foreign minister has refused to confirm that the country conducted a missile test, saying its missile programme is not part of a 2015 nuclear deal between his country and world powers.

The White House said on Monday it is studying the details of an Iranian ballistic missile test.

Iran is the subject of a United Nations Security Council resolution prohibiting tests of ballistic missiles designed to deliver a nuclear warhead.

Iran’s missiles, he added, are “not designed for the capability of carrying a nuclear warhead . . . Our ballistic missile was designed to carry a normal warhead in the field of legitimate defence.”

A US defence official said on Monday the missile test ended with a “failed” re-entry into earth’s atmosphere. The official had no other details, including the type of missile.

State department spokesman Mark Toner said the US was looking into whether the ballistic missile test violates the UN Security Council resolution.

Mr Zarif said he hopes the issue is not used as “an excuse for some political games by the new US administration”.

Israeli prime minister Binyamin Netanyahu has said he will bring up renewed sanctions on Iran when he meets with US president Donald Trump at the White House next month, following reports of a ballistic missile test.

“In my coming meeting with President Trump, I plan to raise the resumption of sanctions against Iran in this context and in other contexts,” Mr Netanyahu said on Twitter. “Iranian aggression will not go unanswered.”

Mr Netanyahu will visit the US on February 15th for talks with the president, White House press secretary Sean Spicer said at his daily briefing on Monday.

Mr Netanyahu was one of the most vocal opponents of the successful global effort led by the Obama administration to reach the 2015 deal with Iran that lifted economic sanctions in return for curbs on the Iranian nuclear programme.