Iran’s Revolutionary Guards reject talks with US after Trump appeal 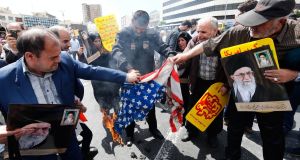 Iranian demonstrators burn a US flag during a rally in Tehran to show their support of Iran’s decision to pull out from some part of nuclear deal. Photograph: Abedin Taherkenareh/EPA

Iran’s Revolutionary Guards said on Friday that Tehran would not negotiate with the United States and a senior cleric warned that a US navy fleet could be “destroyed with one missile”, as a US aircraft carrier headed towards the Gulf.

The comments by the Guards and by Ayatollah Yousef Tabatabai-Nejad, a hardliner, appeared partly aimed at discouraging President Hassan Rouhani and his moderate allies in Tehran from taking up an offer of talks from Washington.

US president Donald Trump on Thursday urged Iran’s leadership to sit down and talk with him about giving up their nuclear programme and said he could not rule out a military confrontation given the heightened tensions.

The carrier Abraham Lincoln, deployed by the Trump administration to the Middle East as a warning to Iran, passed through Egypt’s Suez Canal on Thursday.

American B-52 bombers have also arrived at a US base in Qatar, US Central Command said. Iran has dismissed the dispatch of both the bombers and the aircraft carrier as “psychological warfare” designed to intimidate it.

The semi-official ISNA news agency, reporting from the central Iranian city of Isfahan, quoted Ayatollah Tabatabai-Nejad as saying: “Their billion [-dollar] fleet can be destroyed with one missile.”

“If they attempt any move, they will . . . [face] dozens of missiles because at that time [government] officials won’t be in charge to act cautiously, but instead things will be in the hands of our beloved leader [Ayatollah Ali Khamenei],” he said.

Tabatabai-Nejad is the representative in Isfahan of supreme leader Khamenei, who is widely seen to be close to hardliners who oppose Mr Rouhani and his moderate allies.

Separately, Yadollah Javani, the elite Revolutionary Guards’ deputy head for political affairs, said: “No talks will be held with the Americans, and the Americans will not dare take military action against us.”

“Our nation . . . sees America as unreliable,” said Mr Javani, according to the semi-official Tasnim news agency.

Thousands of Iranians took part in state-sponsored marches on Friday to show support for the government’s decision to scale back curbs on its nuclear programme agreed under a 2015 deal with world powers. Iran has threatened to do more if signatories do not shield it from US economic sanctions.

State television showed the protesters marching after Friday prayers in Tehran and said similar marches were held across the country.

“America should know, sanctions have no effect!” chanted the protesters, many of whom carried signs reading “Down with USA”.

Mr Trump, who last year pulled Washington out of the Iran nuclear deal and reimposed sanctions on Tehran, has expressed a willingness to meet Iranian leaders in the past to no avail and renewed that appeal in talking to reporters on Thursday.

Asked about Mr Trump’s comments, Iran’s ambassador to the United Nations, Majid Takht Ravanchi, said Tehran had been talking with the six powers, including the United States, within the framework of the nuclear deal.

“All of a sudden he [Trump] decided to leave the negotiating table . . . What is the guarantee that he will not renege again?” Takht Ravanchi said in a US television interview.

He dismissed US allegations of an Iranian threat as “fake intelligence” and said they were “being produced by the same people” who did so in the run-up to the US invasion of Iraq in 2003.

US officials, speaking on condition of anonymity, said one of the pieces of intelligence which caused US concerns, indicated Iran had moved missiles on boats. One of the officials said the particular missile observed was perhaps capable of being launched from a small ship.