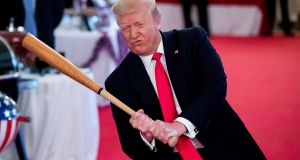 US president Donald Trump at an event showing off American products ahead of Independence Day. Photograph: Michael Reynolds/EPA

US president Donald Trump asserted that the US economy was “roaring back” as new data showed it added almost five million jobs last month, before the latest spike in coronavirus cases in the United States.

Speaking at a press conference in the White House, Mr Trump said the new figures marked the “largest monthly jobs gain in the history of our country”, showing that the economy was “coming back extremely strong”.

He also noted that retail sales had rebounded last month, rising by 18 per cent, while unemployment fell from 14.7 per cent in April to 11.1 per cent – still the highest level since the second World War.

Later, at an event in the White House, he warned of an economic recession akin to the 1929 crash if there is a change in administration following November’s presidential election.

“You’ll have a crash like you’ve never seen before [if] you put the wrong person in office,” he said. “We built the greatest economy in the history of the world, and we’re now doing it again. And I think we’ll do even better the second time than we did the first time.”

While the better-than-expected jobs figures boosted the stock market, analysts warned that more job losses could be on the way as states pause their reopening plans in the wake of rising infection rates.

The US is grappling with a surge in coronavirus cases, in part reflecting an increase in testing for Covid-19, but also an increase in the number of tests showing up positive. On Wednesday the US posted an increase of more than 50,000 cases – the highest one-day tally since the pandemic began.

Dozens of states across the country have reported an increase in infections in recent days, with Texas reaching more than 8,000 new infections on Wednesday and California shutting down bars and curtailing indoor dining in restaurants.

Florida continued to be among the worst-hit areas of the country, reporting 10,000 new cases on Thursday.

Health experts fear that the rate of infections could continue to rise as Americans prepare to celebrate Independence Day this weekend. Mr Trump is due to travel to Mount Rushmore in South Dakota for a fireworks celebration on Friday.

Speaking at the press conference to mark the new job numbers, Mr Trump said “some areas that were very hard hit are now doing very well. Some were doing very well and we thought they may be gone and they flare up and we’re putting out the fires.”

Mr Trump’s presidential rival Joe Biden welcomed the job numbers, but said the was “still in a deep, deep job hole because Donald Trump has so badly bungled the response to coronavirus, and now has basically given up on responding at all”.

He also accused the president of being out of touch with many Americans who had lost their jobs during the pandemic. “For everyone whose job hasn’t come back, for everyone who doesn’t own stock, who can’t get the sweetheart loan through connections, does this feel like a victory?” he said in the live-streamed event.