India’s poor offered smartphones and other freebies for votes 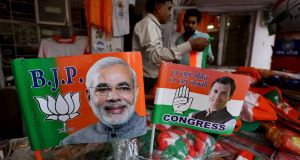 Rival political parties in India are vying to outdo each other in distributing assorted freebies to voters in elections in five states across the country.

In nearby Rajasthan state, chief minister Vasundhara Raje has come up with a novel multi-tiered freebie ahead of the December 7th polls. Her BJP-led government has provided tens of thousands of poor people, who constitute the bulk of voters, with free smartphones and six-month internet data packs.

“We have ensured that the poor in Rajasthan know about our government’s welfare schemes at the touch of a button and are persuaded to vote for us,” Ms Raje recently declared.

Her counterpart Shivraj Singh, in adjoining Madhya Pradesh state, has promised smartphones to thousands of students, many of whom are first-time voters.

Not to be outdone, the opposition Congress Party, if elected aims to launch the commercial production in Madhya Pradesh of cow urine, which many Indians believe has medical properties.

It also plans on instituting roadside camps in the state to treat sick cows and to cremate them after they have died. India’s majority Hindu community considers cows sacred.

The BJP, Congress and other regional parties are also making rash financial promises such as waiving loans for farmers, another influential vote bloc, and providing them with free electricity, seeds and fertiliser. Additionally they are promising large, interest-free loans for the poor, Dalits or lower castes and tribal people who, once again, comprise the bulk of voters in several states.

Political analysts said the trend of offering freebies and incentives to voters had gained momentum in recent years in India, as polls in the era of social media were being contested with greater intensity.

“Indian voters are no longer content with being offered the traditional sops of water, power and roads,” said Seema Mustafa of the Centre for Policy Research in Delhi. Social media and 24-7 television news channels have made them more aware and more demanding, she added.

Complaints regarding “dole politics” made to the federal Election Commission, which manages Indian elections , have proved ineffective.

“The commission cannot do much as its jurisdiction begins only after the poll schedule is announced, which is normally 45 days before polling,” said former chief election commissioner SY Quraishi. The offering of freebies begins several months before elections were announced, he said.

All results will be announced on December 11th, and many political parties consider the poll a barometer ahead of general elections due early next year.