US president said people wear disguises to vote in the state, offers no evidence 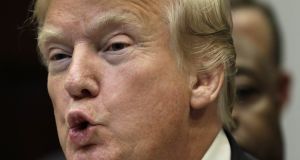 Donald Trump has claimed without evidence that people wear disguises to vote illegally in Florida as the state hurtles towards a Thursday deadline for completing vital election recounts.

Many of the swing state’s 67 counties have finished running their ballots through tallying machines for a second time to decide US Senate and governor’s races but, more than a week after election day, major Democratic strongholds are still struggling amid partisan recriminations, a barrage of lawsuits and untested allegations of fraud.

On Wednesday the US president once again stirred the pot. “The Republicans don’t win and that’s because of potentially illegal votes,” Mr Trump told the conservative Daily Caller website. “When people get in line that have absolutely no right to vote and they go around in circles. Sometimes they go to their car, put on a different hat, put on a different shirt, come in and vote again. Nobody takes anything. It’s really a disgrace what’s going on.”

He also called for new national ID laws with a bizarre assertion: “If you buy a box of cereal – you have a voter ID.”

The state’s Republican governor, Rick Scott, running closely against the incumbent Democrat Bill Nelson for the Senate seat, has also asserted that the election is being stolen. The state elections department and the Florida department of law enforcement, both run by Republican appointees, deny seeing any evidence of fraud.

With the eyes of the political world on Florida, still haunted by Bush v Gore in the 2000 presidential election, there was a fresh headache in Palm Beach county, where tallying machines overheated. This caused mismatched results with the recount of 174,000 early voting ballots, forcing workers to go back and redo their work with no time to spare.

Susan Bucher, the supervisor of elections, told the Associated Press: “The machines are old. I don’t think they were designed to work 24/7, kind of like running an old car from here to LA. And so, you know, things happen to them.”

Eight million votes were cast in Florida and the counties’ deadline is Thursday at 3pm, pending court action by Democrats seeking to extend it. Indeed, the disputed election is proving a bonanza for lawyers on both sides. Six federal lawsuits have been filed so far in the state capital, Tallahassee.

Lawyers for Democrats asked a federal judge on Wednesday to set aside the state law mandating that mailed-in votes be thrown out if the signature on the envelope does not match the signature on file. Nelson’s campaign has also filed a lawsuit seeking public records from a north Florida elections supervisor who allowed voters in the Republican-heavy Bay county to email their ballots in apparent violation of state law.

The US district judge Mark Walker, nodding to an episode of the science fiction series Star Trek, said during a hearing: “I feel a little bit like Captain Kirk in the episode with the Tribbles where they start to multiply.”

State law requires a machine recount in races where the margin is less than 0.5 percentage points. In the Senate race, Mr Scott’s lead over Bill Nelson was 0.14 points. In the governor’s contest, unofficial results showed the Republican Ron DeSantis ahead of the Democrat Andrew Gillum by 0.41 points. Mr Scott has agreed to step down from the state panel responsible for certifying the final results.

Yet on Wednesday, he was at the US Capitol in Washington, standing at Mitch McConnell’s left shoulder as the majority leader welcomed Republican senators who will take their seats in January when the new Congress is sworn in. He ignored a shouted question about whether he still contends there was fraud in the election. – Guardian Service

India’s supreme court refuses to put citizenship law on hold 17:33
Harvey Weinstein was not just a Hollywood titan but ‘a rapist’, trial told 17:24
Storm Gloria leaves eight dead and three missing in Spain 16:56
Eyewitness to Auschwitz: ‘We were held in the wagons like animals’ 16:34
Trump criticises ‘hoax’ impeachment trial as he departs Davos 13:47

1 Eyewitness to Auschwitz: ‘We were held in the wagons like animals’
2 Election 2020: 10 key questions to ask candidates on your doorstep
3 Election 2020: Peter Casey to stand in both Donegal and Dublin West
4 Which jobs do teenage girls and boys aspire to have by age 30?
5 Mother cannot appeal 2011 refusal of care allowance for daughter, court rules
Real news has value SUBSCRIBE