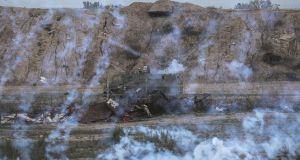 Israeli military jeep fire tear-gas during the clashes after Friday protests near the border between Israel and eastern Gaza Strip, on December 13th, 2019. Photograph: Mohammed Saber/EPA

A full investigation into alleged war crimes in the Palestinian Territories, which could include charges against Israelis or Palestinians, is to be opened by the International Criminal Court (ICC).

“I am satisfied that ... war crimes have been or are being committed in the West Bank, including East Jerusalem, and the Gaza Strip,” ICC chief prosecutor Fatou Bensouda said in a statement on Friday.

Israeli prime minister Binyamin Netanyahu said the ICC has no jurisdiction to investigate in the Palestinian Territories.

“The ICC only has jurisdiction over petitions submitted by sovereign states. But there has never been a Palestinian state,” Mr Netanyahu said in a statement.

He said the decision “has turned the International Criminal Court into a political tool to delegitimise the state of Israel.

“The prosecutor has completely ignored the legal arguments we presented to her,” he added.

Ms Bensouda said the preliminary examination into alleged war crimes, opened in 2015, had rendered enough information to meet all criteria for opening an investigation.

The ICC prosecutor said she had filed a request with judges for a jurisdictional ruling, because of the contested legal and factual status of the Palestine territories.

The court has the authority to hear cases of war crimes, genocide and crimes against humanity committed on the territory of the 123 countries that have signed up to it. Israel has not joined the court but the Palestinian Authority – a limited self-rule body in the Israeli-occupied West Bank – has done so.

With the peace process at a standstill for more than a decade, the Palestinians have in recent years sought to hold Israel accountable for alleged violations of international law, including the construction and expansion of Jewish settlements in the West Bank and east Jerusalem.

Israel seized those territories along with the Gaza Strip in the 1967 Middle East war. The Palestinians want all three to be part of their future state.

In a legal opinion released on Friday, Israel’s attorney general Avichai Mandelblit said the Palestinians do not meet the criteria of statehood because they do not have sovereignty over defined borders. Citing past peace agreements, Israel said the two sides had agreed to resolve their territorial dispute in negotiations.

“By approaching the ICC, the Palestinians are seeking to breach the framework agreed to by the parties and to push the court to determine political issues that should be resolved by negotiations, and not by criminal proceedings,” the legal opinion said.

The Palestinians insisted they are a fully fledged member of the court and that it has jurisdiction. – Reuters/AP