Conservative president in close scrap with centre-left and nationalist challengers 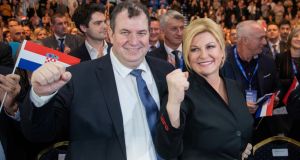 Croatia’s president Kolinda Grabar Kitarovic poses for a picture with her husband, Jakov Kitarovic, during an election rally in Zagreb. Photograph: Antonio Bronic/Reuters

Croatia will vote in a tight presidential election race on Sunday, with incumbent conservative Kolinda Grabar-Kitarovic under pressure from left and right as the country prepares for its first spell at the helm of the European Union.

Surveys give her a narrow lead over her top two rivals in a field of 11 candidates, but she has looked uncertain and made blunders during her campaign while moving to the right to try to thwart the challenge from Mr Skoro.

“We have pulled Croatia out of apathy and gloom. Croatia is no longer on its knees,” she told a campaign rally in the capital, Zagreb, on Thursday.

“Croatia is again known in the world for its successes. I’m proud to have had a chance to help Croatia come out of the recession, I’m proud that I have strengthened Croatia’s standing in the world,” local media quoted her as saying.

Ms Grabar-Kitarovic (51) became Croatia’s first female president in 2015, and claims to offer her nation of 4.2 million people a combination of experience, dynamism and the common touch that her opponents cannot match.

Yet she attracted mockery during the campaign by claiming to have reached international agreements that would bring Croatians jobs with a salary of €8,000, some 10 times the current average monthly wage.

She also sang at a birthday party for scandal-plagued Zagreb mayor Milan Bandic and said she would bring him cakes if he was jailed on corruption charges.

Ms Grabar-Kitarovic has struck a strong nationalist and populist tone in response to the popularity of Mr Skoro, who portrays himself as an “anti-establishment” candidate who can shake up Croatia’s political scene.

Mr Skoro (57) has pledged to pardon a convicted war criminal if he wins the election and to use the military to stop migrants entering the country illegally from Bosnia.

“A vote for Miroslav Skoro is a vote for the people, and if you vote for Kolinda Grabar-Kitarovic or Zoran Milanovic, it does not make a difference,” he told a rally in the coastal city of Split, dubbing his rivals “two faces of the same system”.

Mr Milanovic (53) combines more liberal views with a strong populist streak, and vows to anchor Croatia in the European mainstream six years after it became the last country to join the EU.

Ms Grabar-Kitarovic is backed by the ruling Croatian Democratic Union, and her defeat could lead to discord between the government and a new head of state just after the nation assumes the rotating EU presidency on January 1st.