The White House has called the accusation, made by Florida representative Frederica Wilson, that US president Donald Trump made insensitive comments to the widow of a fallen soldier "appalling and disgusting." Video: Reuters/The White House 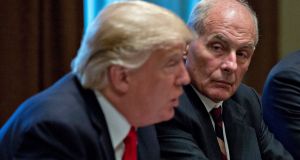 US president Donald Trump and White House chief of staff John Kelly. Mr Kelly’s son, like the retired general a US marine, died in Afghanistan in 2010. Photograph: Andrew Harrer/EPA

The mother of a US soldier killed in an ambush in Niger said on Wednesday that President Donald Trump disrespected her family during a call with the man’s widow by saying the soldier “knew what he signed up for”.

Mr Trump had denied he said those words to Sgt La David Johnson’s wife during a phone call and escalated his dispute with Democratic congresswoman Frederica Wilson, who first described the exchange on Tuesday.

Speaking before a meeting with members of the Senate finance committee, Mr Trump said, “I had a very nice conversation with the woman, with the wife, who sounded like a wonderful woman.” He also asserted, “I didn’t say what that congresswoman said. Didn’t say it at all, she knows it.”

Yet when asked about Ms Wilson’s account of the call on Wednesday, Sgt Johnson’s mother, Cowanda Jones-Johnson, backed the congresswoman’s version. “Yes, he did state that comment,” Ms Jones-Johnson said of Mr Trump, corresponding via Facebook.

Pressed twice by reporters about Ms Wilson’s description, Mr Trump dared her to make the allegations again. “Let her make her statement again and then you’ll find out,” the president said.

The back and forth has angered many, including Democratic congressman Alcee Hastings, who said Mr Trump needed to stop disrespecting Sgt Johnson’s family.

“My position is that the vapid, vacuous vessel that is Donald Trump’s brain produces lie after lie after lie,” Mr Hastings said. “All of us see this and somebody needs to say to him, not just as it pertains to this issue, ‘Stop the damn lies.’”

Ms Wilson recounted details of Mr Trump’s call with Sgt Johnson’s widow, Myeshia Johnson. On Tuesday, Ms Wilson was in the car with Ms Johnson and said she overheard the phone call from the president, who was on speakerphone.

Sgt Johnson was killed in an ambush in Niger earlier this month that killed three other soldiers and injured two in the Army Special Forces Unit.

Democrat Congresswoman totally fabricated what I said to the wife of a soldier who died in action (and I have proof). Sad!

Ms Wilson said that during the call, the president told Myeshia Johnson “something to the fact that he knew what he was getting into when he signed up,” the congresswoman said in an interview on MSNBC’s Morning Joe on Wednesday.

“But that’s not the worst part,” Ms Wilson said. “She was crying the whole time and when she hung up the phone she looked at me and said ‘he didn’t even remember his name’. That’s the hurting part.”

Mr Trump’s comments were the latest in a series of remarks he made this week drawing attention to grieving families of fallen solders.

Mr Trump took to Twitter early on Wednesday and disputed the account. “Democrat Congresswoman totally fabricated what I said to the wife of a soldier who died in action (and I have proof). Sad!” Mr Trump did not say what proof he had.

Ms Wilson said she stood by her description of the call. “I don’t know what kind of proof he could be talking about,” Ms Wilson said on CNN’s New Day. She added, “I have proof, too.”

Later on Wednesday morning, Ms Wilson pushed back against the president in a Twitter post: “I stand my account of the call with @realDonaldTrump and was not the only one who heard and was dismayed by his insensitive remarks.”

Sgt Johnson (25) was from Miami Gardens, Florida, the US defence department said. He and Myeshia Johnson had two children, and she is pregnant.

The Pentagon has launched an investigation into the ambush in Niger. Mr Trump has said very little about the Niger episode. When he was asked by a reporter about this on Monday, he responded by saying he had written letters to the soldiers’ families.

Mr Trump compared his actions to past presidents and said past presidents have not always contacted families of those killed in action. He singled out former president Barack Obama, saying he had not made such calls, an assertion that quickly drew angry rebukes from former Obama aides.

In a radio interview on Tuesday, Mr Trump suggested that Mr Obama never called John Kelly, a retired Marine Corps general and now the White House chief of staff, when his son died in Afghanistan in 2010. “You could ask General Kelly, ‘Did he get a call from Obama?’”

Mr Trump said in an interview on Fox News Radio. “I believe his policy was somewhat different than my policy. I can tell you my policy is I called every one of them.”

Mr Trump’s tweet rebutting Ms Wilson’s account of the phone call was his sixth Twitter post on Wednesday morning and came after Ms Wilson’s description was discussed on morning news shows. Mr Trump often takes to Twitter with reactions to what he sees on television.

Mr Trump’s first Twitter posts were about the former FBI director, James Comey, as well as about his Democratic opponent in the 2016 election, Hillary Clinton, and the ongoing debate about professional football players kneeling during the national anthem.

“Total disrespect for our great country,” Mr Trump wrote on Wednesday, referring to the football players.

Harvey Weinstein was not just a Hollywood titan but ‘a rapist’, trial told 17:24
Storm Gloria leaves eight dead and three missing in Spain 16:56
Eyewitness to Auschwitz: ‘We were held in the wagons like animals’ 16:34
Trump criticises ‘hoax’ impeachment trial as he departs Davos 13:47
Greek islanders protest over crowded migrant camps 10:37

1 Eyewitness to Auschwitz: ‘We were held in the wagons like animals’
2 Election 2020: 10 key questions to ask candidates on your doorstep
3 Which jobs do teenage girls and boys aspire to have by age 30?
4 Election 2020: Peter Casey to stand in both Donegal and Dublin West
5 Eating out in Dublin – the homeless way
Real news has value SUBSCRIBE