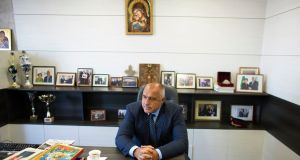 Bulgaria’s parliament has revived plans to construct a major new nuclear power station on the Danube river, fuelling concerns over environmental and corruption risks and Russian efforts to regain influence in the Balkan state.

That deal with Russian state nuclear firm Rosatom was scrapped in 2012 due to Bulgaria’s failure to find other foreign investors willing to meet costs that were predicted to spiral towards €10 billion.

At the same time, Sofia was coming under pressure from the EU and United States to reduce its energy dependence on Moscow, and the project was dogged by suspicions of corruption and fears over possible seismic instability at Belene.

Bulgaria had to pay the Russian firm some €600 million in compensation, but it was left with much of the equipment needed to build the proposed twin reactors.

“There is real investment interest from several companies, which are global energy leaders, and we can create something that will guarantee Bulgaria’s energy security.”

Rosatom and China’s National Nuclear Corporation have expressed interest in the renewed scheme, but Bulgaria’s government says it does not want to spend any more public money on the project, offer state guarantees or commit to long-term deals to buy electricity produced by the plant.

About 300 people rallied outside parliament in Sofia on Thursday to protest against the government’s plans.

“This project is economically unprofitable [and] ecologically dangerous,” said Atanas Atanasov, a protest organiser and co-leader of an opposition group called the Democratic Bulgaria Coalition.

He accused Mr Borisov of lying to Bulgarians who voted for his right-wing Gerb party in elections last March, when he made no mention of reviving the Belene project.

In recent weeks, both Mr Borisov and Bulgarian president Rumen Radev have visited Russia for talks with its president, Vladimir Putin, amid signs that the EU and Nato member is keen to improve traditionally strong ties with Moscow that have suffered in recent years.

In Moscow, Mr Radev called the revival of Belene an “act of realism” and a project that “has a future, under a clear legal, time and financial framework”.

He also backed a new TurkStream pipeline under the Black Sea to bring Russian gas to Bulgaria.

After talks with Mr Putin on May 30th, Mr Borisov said: “The second fork of TurkStream will reach Bulgaria and through it Russian gas will come from Russia...I am thankful that we are returning to the gas distribution role that we had in the Balkans.”