Country’s Catholic 2.4% under attack from radical Hinduism and Indian nationalism 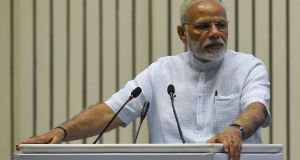 The Vishwa Hindu Parishad (VHP), or World Hindu Council, declared on Wednesday that in collusion with the Vatican, the Catholic Church is trying to foster an atmosphere of “distrust” against Mr Modi’s administration, in addition to “denigrating” Hindus and India as a nation.

Surendra Jain of the VHP, which is committed to organising, consolidating and protecting the Hindu Dharma from “religious impurity”, said the church’s agenda of “religious conversions” was endangering India’s constitution.

He also accused the church of nurturing a conspiracy to install governments in India that run on directions from the Vatican.

Mr Jain was reacting to two recent letters by Catholic bishops in New Delhi and Goa to their parish priests and their respective dioceses, warning them that India’s secular fabric guaranteed in its constitution was under threat from communal and sectarian forces.

Without directly naming Mr Modi’s Hindu nationalist BJP government, Archbishop of Delhi Anil Couto stated in late May that India was witnessing a turbulent political atmosphere that posed a threat “to the democratic principles and secular fabric enshrined in its constitution”.

Spokesman for the Delhi Catholic archdiocese Fr Savarimuthu Sankar said Archbishop Couto’s letter was prompted by continued violence against Christians over the past four years and attempts to bring back to Hinduism people who had converted to Christianity.

Archbishop of Goa Filipe Neri Ferrao echoed Archbishop Couto’s sentiments on Tuesday by declaring in a similar letter that “human rights are under attack and democracy [in India] appears to be in peril”. He said India’s constitution was endangered and that was the reason why most of people were “living in insecurity”.

“In this context, particularly as general elections are fast approaching, we must strive to know our constitution better and work harder to protect it,” he wrote, adding that India’s minority communities feared for their safety.

The BJP said the bishops’ letters were “unfortunate” and akin to calling on people to vote along communal and religious lines in general elections scheduled before the end of May 2019.

Christians, who comprise 2.4 per cent of India’s population of more than 1.3 billion – of whom four-fifths are Hindus – have steadily been under attack since Mr Modi’s BJP government came to power in May 2014.

According to Open Doors – the nondenominational international mission supporting persecuted Christians in more than 70 countries – India’s record in protecting its Christian minority community has deteriorated. It listed India as the 11th on a list of countries where it is most difficult to live as a Christian in 2018, up from 15th last year.

According to Open Doors, radical Hinduism and Indian nationalism are the driving factors in the increasing levels of unrest and instability that the country’s Christians faced.

In 2014, for instance, India scored only 55 adverse points in its Christian persecution record, but four years later this score had increased to 81 points in what Open Doors claims is one the “fastest and most intense increases” in a non-Muslim majority country.

Open Doors counted some 600 persecution incidents against Christians in India last year, though in reality this number was far higher as many cases remained unreported, the Christian activist organisation said on its website.

“Under Modi, religious freedom violations against Christians – such as social exclusion, abuse, and imprisonment – have spread unchecked,” it added.