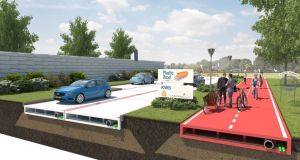 The world’s first recycled plastic bicycle paths – regarded as a key stage in the development of revolutionary new plastic roads – are to be tested in the Netherlands, starting in September.

The pilot stretches will prefabricated, so that when they’ve reached the end of their working lives, they can be lifted out, replaced, and recycled again, becoming part of the more sustainable low-carbon “circular economy”.

The paths are a joint venture between Dutch engineers KWS, the oil and gas conglomerate Total, and pipe-makers Wavin, and aim to use discarded plastic – the water bottles and packaging currently clogging the world’s oceans and landfills – to build a more eco-friendly urban future.

“Recycled plastic has all kinds of advantages over current road or cycle path construction, which is why we’re now starting to see it as the green alternative to asphalt,” said Rolf Mars of KWS. “Overall, it has a much smaller ecological footprint.”

The prefabricated sections of cycle path are light and hollow: the former making them easier to transport and faster and cheaper to install, and the latter making it easier to run cables and utility pipes through the moulded ducts below the surface.

Most of the benefits of the plastic bike paths will also apply to plastic roads.

For example, because their three-dimensional design has allowed for of all the practicalities – including how they deal with problems such as flooding – they also need less maintenance, which means less business time lost to the economy as a result of traffic jams during roadworks.

And instead of having to spend days painting road markings and adding crash barriers once the surface itself is in place, all this is done in advance.

So it’s easy to see why the business case is already looking extraordinarily attractive to local authorities and government infrastructure planners far beyond the Netherlands.

The paths have been in development since 2015. The first 30-metre-long stretch will be tested near the town of Zwolle, from September, and a second will be tested before the end of this year.

Rotterdam could then become the first city to use them in a so-called “street lab” environment.

However, what’s really exciting the global construction industry is that recycled plastic roads could follow quickly – cutting the time it currently takes to build a section of road by up to 70 per cent, with a life expectancy three times as long as traditional paving.

In addition to those economic arguments, the environmental case is just as compelling: as a surface, asphalt – or more specifically, asphalt concrete – is responsible for an extraordinary 1.6 million tons of CO2 emissions a year globally: the equivalent of two per cent of all road transport emissions.