EU ministers back US return to Iran nuclear deal under Biden 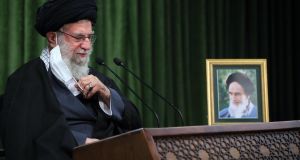 Iran’s supreme leader Ayatollah Ali Khamenei: he said Iranian authorities should not wait “an hour” if there was a chance to have US sanctions lifted. Photograph: AFP via Getty Images

European powers are backing president-elect Joe Biden’s suggestion that the US returns to a landmark nuclear deal with Iran in its existing form, and leave their more contentious push to expand the accord to curb Tehran’s military and regional policies until later.

Germany, France and the UK committed, along with fellow accord signatories Iran, Russia and China, to “positively address” Washington’s possible re-entry after President Donald Trump quit in 2018.

The approach – which is likely to disappoint the US’s main Middle East partners – sets the stage for Mr Biden’s administration to lay out its strategy once it takes office next month. Mr Biden has said he sees a return to the current 2015 agreement as the best immediate route to regional stability, with the possibility for “follow-on” accords to toughen nuclear curbs and address Iran’s ballistic missile activities.

Foreign ministers from the six remaining signatory countries to the deal, which is known as the JCPOA, offered encouragement for Washington’s return, while not mentioning proposals to widen the accord.

“Ministers acknowledged the prospect of a return of the US to the JCPOA, and underlined their readiness to positively address this in a joint effort,” said a statement issued by the officials after a virtual meeting on Monday.

Mr Biden told the New York Times this month that “the best way to achieve getting some stability” is to deal “with the nuclear programme”.

He said his administration would also engage with allies and partners on “follow-on agreements to tighten and lengthen Iran’s nuclear constraints, as well as address the missile programme”.

The show of unity comes after the so-called “E3” European powers warned Iran this month that its plans to expand its atomic energy programme risked scuppering efforts to revive the deal after Mr Trump leaves power.

Heiko Maas, Germany’s foreign minister, said the nuclear agreement would have to be “expanded” to include “Iran’s regional role, its ballistic missile programme”.

The statement on Monday suggested that European powers do, however, agree that the immediate priority should be to focus on ensuring Tehran returns to full compliance with the nuclear agreement and enter negotiations with the Biden administration.

The E3 shared Mr Trump’s concerns about Iran’s regional activities and its missile programme, but they opposed his decision to withdraw from a nuclear deal they saw as vital to stop the Islamic republic developing the capability for atomic weapons.

By contrast the US’s main Middle East allies – Israel, Saudi Arabia and the United Arab Emirates – supported Mr Trump’s decision to abandon the deal. They believe the accord emboldened Tehran to step up what they brand its malign activities in the region. Saudi and Emirati officials have repeatedly said that the agreement should include Iran’s missile programme and support to militant groups.

But Saeed Khatibzadeh, Iran’s foreign ministry spokesman, said on Monday that his country was “very clear that we will not renegotiate the JCPOA”.

Iran’s supreme leader Ayatollah Ali Khamenei said last week that the three European states had “displayed a total lack of commitment and extreme malice, duplicity, and hypocrisy”. But he added that Iranian authorities should not wait “an hour” if there was a chance to have US sanctions lifted.

President Hassan Rouhani, an architect of the deal whose second and final term ends in June, said last week that his government would go back to full compliance immediately if Washington returned to the agreement and lifted sanctions. – Copyright The Financial Times Limited 2020