Comments likely to infuriate president, who is desperately attempting to overturn election 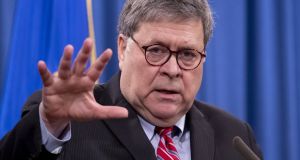 William Barr, the US attorney-general, said there was “no basis” for seizing voting machines or appointing a special counsel to look into voter fraud, in a clear rejection of President Donald Trump’s increasingly desperate attempts to overturn the election result.

Mr Barr’s intervention comes at a febrile time in Washington, as Mr Trump and his allies explore extrajudicial ways of reversing the election outcome with just 30 days until Joe Biden’s inauguration.

Sidney Powell, a lawyer who has promoted a conspiracy theory that the late Venezuelan leader Hugo Chávez was behind a scheme to plant faulty voting machines across the US, met Mr Trump at the White House at the weekend. The president has reportedly considered appointing Ms Powell as special counsel to investigate voter fraud.

On Friday the civilian and military heads of the army, secretary Ryan McCarthy and general James McConville, issued a joint statement that there was “no role for the US military in determining the outcome of an American election”.

And Rudy Giuliani, the president’s personal lawyer, has also reportedly called on the US department of homeland security to seize voting machines that were used on November 3rd.

The outlandish ideas from some of the president’s advisers come after a failed attempt by Mr Trump to overturn the election in the courts and an unsuccessful pressure campaign directed at Republican state officials to prevent the results from being certified.

In comments that are sure to infuriate the president, Mr Barr used one of his last appearances as attorney-general to dismiss the ideas being floated by some in Mr Trump’s circle.

Mr Barr, who submitted his resignation letter last week and will leave his post on Wednesday, said in a press conference on Monday that he saw “no basis now for seizing machines by the federal government”. He also rejected calls for a special counsel to investigate voter fraud or the business affairs of Hunter Biden, Joe Biden’s son.

Mr Biden won the US presidential election on November 3rd with a record-setting tally of more than 80 million votes. Last week, the electoral college met to officially select him as the president-elect, and he received 306 electoral votes to Mr Trump’s 232.

Mr Biden, the former vice-president, is set to be sworn in as the 46th US president on January 20th, and, after weeks of hesitation, most senior lawmakers on Capitol Hill, including Republican Senate majority leader Mitch McConnell, have offered him their congratulations.

But the president and some of his closest allies continue to maintain, without evidence, that the election was rigged against him.

Earlier this month, Mr Trump was reportedly angered by an interview Mr Barr gave in which he said he had not seen evidence of voter fraud that would change the outcome of the presidential election.

On Monday the president took to Twitter to attack Brian Kemp, the Republican governor of Georgia, and other Republican officials in the state who have refused to bend to his demands. Mr Trump called them “Rinos” – or Republicans in name only – adding: “We will easily win presidential state race.”

Mr Biden was the first Democratic presidential candidate to win Georgia in almost three decades, securing victory by a margin of just under 12,000 votes. Two Senate run-offs in Georgia, to be held on January 5th, will determine which party controls the upper chamber of Congress.

Peter Navarro, the president’s economic adviser, told Fox Business on Monday that the Georgia run-offs should be postponed, describing the state as a “cesspool” of voting irregularities. Votes in Georgia have already been counted three times, following a statewide audit and a statewide recount. – Copyright The Financial Times Limited 2020