Roscommon footballers shave or dye to raise funds for hospice 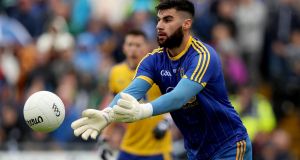 When the GAA season eventually does resume, the Roscommon senior footballers will be sporting some fairly interesting haircuts. The team are aiming to raise €30,000 for the county’s hospice with a shave or dye fundraiser over the coming weeks, one of many initiatives nationwide as the GAA community wields its influence to help charities.

Within two days of goalkeeper Colm Lavin setting up a GoFundMe page, the Roscommon team had already raised over €7,000.

Talisman Enda Smith explains,“we hope to raise €30,000 and raise awareness of the great work these workers do, all year round. We can’t spend our money on match tickets and days out across the country so we’re asking people to get behind this instead.”

Between Roscommon players, management and backroom staff over 50 of them will take part in the fundraiser, and from next Monday fans who donate get to vote and decide who shaves their hair off and who must dye it a different colour.

Some of the management team will have to get creative however. “Seamus Hunt - the team masseuse - he’s no hair so he’s going shaving his beard,” Lavin told The Irish Times. “And it’ll be the first time since 1983 that he’ll be clean shaven.”

Mayo-Roscommon Hospice provides palliative care services to people with terminal or life limiting illnesses and support to families who have lost a loved one. But the government’s lockdown restrictions have closed all 12 of their charity shops and all public fundraising events have had to be postponed or cancelled - with the hospice noting a drop in income of €30,000 a week.

GO FUND ME LINK IS IN MY BIO ON MY HOMEPAGE 👍🏼 Some of the prizes that I will send to the winners. To enter giveaway please please 1. Donate and screenshot it. 2. Like and share post. 3. Comment basketball or football for what draw you want to enter. https://www.gofundme.com/f/3br4q5-do-it-for-dan?utm_source=customer&utm_medium=copy_link&utm_campaign=m_pd+share-sheet

Anyone who donates €20 to the hospice fund will automatically go into a draw to win one of five signed Roscommon jerseys. Every cent of the money raised goes to the hospice, and additionally, the players are urging isolated fans to get in touch for a chat. An initiative kicked off by former Mayo midfielder David Brady over the weekend, whereby players make a phonecall to GAA fans on lockdown to help them through their isolation.

“If you know somebody who is cocooning at home missing the GAA,” says Lavin, “after you’ve donated please send any of the Roscommon GAA pages a private message with their name and number. We will have one of the panel call them for a chat.

“So far we’ve had really good chats. Mostly about GAA stuff - they’re wondering what we’re up to now training wise and just generally about who they might know from our clubs. They’ve been so grateful, the older people, on the calls. And it’s a great way to bring us all together and keeping us in contact.

“Dave Mannix our strength and conditioning coach puts up our individual plans every day, depending on our positions. And we are in constant contact with him and we are keeping as busy as we can. When the weather is this good we can take our gym stuff outside and it makes it a lot easier than in the rain. But I know talking to some lads, they are finding it hard to stay motivated because we don’t know when we’re training for or what we’re training for. So this helps.”

Meanwhile the Laois hurling team have also launched a shave or dye fundraiser with all proceeds going to the Do it for Dan campaign - on Thursday they were closing in on their €10,000 target.

Dan Donoher was born last year with a rare genetic neuromuscular disease called spinal muscular atrophy (SMA) type one and scoliosis. The life expectancy of an SMA type one child is 18-24 months, but the campaign is hoping to help Dan avail of a ground breaking treatment called Zolgensma.

Currently only available in the US, a once off infusion costs $2.1 million. It can substantially improve both quality of life and survival rates. But the gene therapy can only be given to kids under the age of two. Both of Dan’s parents - Niall and Aisling - are former Laois players.

Kerry’s former Footballer of the Year, Kieran Donaghy has also set up a GoFundMe page to help raise funds for the Donoher family. Within 24 hours of posting, on Thursday morning he had surpassed his target of €5,000, with the names of all those who donate going into a draw to win a selection of his jerseys and boots.

Up in Tyrone, the father of footballer Conor Meyler has completed a full marathon in his garden shed - to raise €20,000 and counting for the hospital where his wife Paula works.

A former inter-county player himself, Seanie Meyler ran the 26.2 miles on a borrowed treadmill on his 54th birthday, in an effort to support the intensive care unit (ICU) at the South West Acute Hospital in Enniskillen.

“Physically I questioned would he be capable due to the severe lack of preparation,” explained his inspired son. “Mentally I knew he’s an absolute animal and he wouldn’t give in. The body can achieve so much more than the mind wants to allow.”