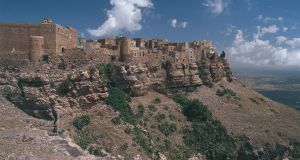 Yemen’s humanitarian catastrophe has galvanised the international community to put pressure on the warring sides to cease fire and negotiate peace, reducing but not halting the conflict.

During nearly four years of intervention by the Saudi-led coalition, more than 60,000 civilians have died and two-thirds of Yemen’s 28 million civilians are malnourished or on the brink of starvation.

Nothing, however, is being done by the international community to halt the destruction and degradation of the country’s rich cultural heritage by the Saudi-led coalition, Houthi rebels and jihadi groups.

Yemen played a unique role in human history 60,000-70,000 years ago when the country received the first Homo sapiens, who migrated across the Red Sea from Africa to the Middle East before travelling west to Europe and east to Asia and Australasia.

Lamya Khalidi, a US archaeologist specialising in Yemen’s ancient heritage, has reported that at least 60 monuments or sites have been damaged or destroyed since the Saudi-led campaign began. Three-quarters of the destruction has been inflicted by Saudi air strikes.

“While [Islamic State] and al-Qaeda have targeted historic sites, their damage was insignificant compared to what the coalition has done,” she told the New Arab website.

Khalida has condemned the total destruction of the museum in the Dhamar region, where she worked for a decade. Built in 2002, the museum held 12,000 artefacts representing several civilisations and gathered from 400 sites.

While the area developed terraced agriculture 5,000 years ago, the city of Dhamar was, during the 16th century AD, famous for its Arabic and Islamic culture and scientific work. The museum, like most of the targets, was located in a civilian area rather than a location hosting military objectives.

Saudi warplanes bombed the Marib Dam, one of the engineering wonders of the ancient world which provided water from the seventh century BC to the 5th century AD, for the city of Marib, capital of the biblical kingdom of Sheba, and irrigation for the nearby plain.

In addition to key monuments, distinctive traditional houses in rural towns and villages, some decorated with the Star of David by Yemeni Jewish builders, have been bombed, shelled or burned. The northwestern Sa’ada province, the Houthi homeland, has been heavily bombed and historic citadels and public buildings have been levelled.

A report issued last November by a Yemeni human rights organisation lists sites that have suffered severe damage. The survey was based on eyewitness accounts from people employed at the heritage sites but is incomplete because some could not be reached due to warfare.