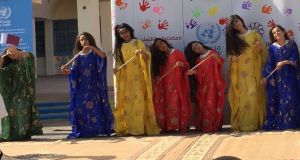 Girls in motley PE clothing exercise in the wide-walled compound of Nuzha secondary school on the edge of Amman, the Jordanian capital.

Formed in a rectangle by their instructor they jump in the air, clap their hands and extend their arms before breaking up and making for the school building, giggling at the sight of visitors.

The grinning girls, wide-eyed, some with hair braided or pulled back in pony tails. Others, in scarves, crowd round us to say “hello”, “good morning” and “welcome” before entering the school building, donning green uniforms and returning to studies in packed classrooms.

Each class in this school, run by the UN’s Palestinian refugee agency, Unrwa, has 50 pupils, aged in their early to mid-teens. They later will go to government schools to prepare for the tawjihi, the equivalent of the Leaving Cert.

There are 1,170 in the secondary school, and 800-900 in the primary school run by Unrwa on the same site. Outside the primary block, girls of different sizes and ages in dark blue uniforms swarm and swerve in play, running, shouting as exuberant children do – although cuts in funding to Unrwa has left the school facing the threat of closure.

Jordan, its Palestinian refugees, and the UN agency caring for them have been reprieved – for now. Unrwa, now in its 68th year, had feared it would shut down 269 schools with 121,000 pupils at the end of last month due to the Trump administration’s withdrawal of $300 million of the regular US 2018 contribution of $364 million.

Chief Jordan field education officer Dr Oroba Subhi al-Mousa tells The Irish Times, “We were told schools would close in May, then in June, finally in September.” The schools remain open due to the massive effort made by Unrwa commissioner general Pierre Krähenbühl and his staff to raise just enough money to fund the schools for a month, two, or three.

Al-Mousa states, “We went everywhere to get money. We explored every possibility. Heads of departments were involved. Staff understood. The crisis peaked during summer vacation. [Headquarters] tried to give us hope but warned us that funds may not be sufficient to go beyond the end of the school year.”

The effort succeeded due to Krähenbühl’s “belief and passion. He was determined not to the fail the refugees”. The EU gave extra funds, beyond the annual contribution.

To address the funding shortfall, Unrwa has adopted a two-track strategy. The agency focuses on raising funds for specific projects while reducing expenses. “We need to survive,” Al-Mousa says. “Some posts have been cut, some frozen, not all vacancies have been filled. Two schools were merged. Teachers had to assume extra loads. There has been a drop in the quality of services.”

Fearing the worst, a few students moved to government schools. Next year poses a fresh challenge. The cancelled US contribution was formerly one-quarter of the agency’s annual budget.

The North Amman district stretches from the capital’s centre to the Jordan River and hosts refugees driven from their homes in both 1948 and 1967. Some 2.3 million Palestinian refugees live in Jordan, of whom 370,000 dwell in camps.

If schools close, primary health care could be next on the list of Unrwa’s main services to be severely curtailed or cut. In Jordan, Unrwa has 25 primary health facilities which receive 1.6 million annual patient visits. Hypertension, obesity and diabetes are major problems.

Opening the door to the health centre next to the Nuzha school, we step from mean streets of a 20th-century refugee settlement into a pristine 21st-century high-tech world. Dr Ishtaiwi Abu Zayed, who heads the field health programme, says, “Patients used to stand outside in the heat to wait. Now they have their dignity.”

Refurbished 18 months ago with funds provided by Saudi Arabia, the centre’s records are computerised and digitised. The 60 per cent of patients who have smartphones access their records on their devices. Staff inform them of appointments and treatments. The clinic provides care for 5,000 patients and deals with 90 visits per day – its catchment area has a population of 81,454. The cost to Unrwa is $20 per capita per year.

Refugees living in Jordan, once known for large families, now have an average of 3.5 children

The hushed waiting rooms of the centre are filled with patients: women with babies and children, pregnant women, women enveloped in black cloaks, women in long coats and headscarves, and a scattering of men, one third of attendees, who may take leave from their work. “They come on Saturdays,” remarks Abu Zayed.

The centre boasts a reception office, a pharmacy where free medications are entered into computers before being issued, a laboratory with up-to-date equipment, a dental surgery, and offices for doctors and nurses for treatment of non-communicable diseases. Pre- and ante-natal care are provided and, although this is a conservative area, family planning. More than 2,500 women secure birth control measures here.

Abu Zayed reveals that refugees living in Jordan, once known for large families, now have an average of 3.5 children – the same rate as for Jordan as a whole. Women go to Jordanian government hospitals to give birth. Unrwa pays 75 per cent of costs, the families pay 25 per cent. He says polio and diphtheria, once scourges among refugees, have been eliminated.

In the ante-natal room, a nurse weighs an eight-day-old baby girl called Joury, and takes a blood sample to test for genetic and other abnormalities so they can be treated promptly, if possible.

All but one of Unrwa’s health centres in Jordan have been upgraded. The exception will be demolished and rebuilt, states Hijawi.

Unrwa cares for 5.67 million registered Palestinian refugees living in East Jerusalem, the West Bank and Gaza and in exile, hosted by Jordan, Lebanon and Syria. The agency has 692 schools in all and more half a million students, and operates 143 primary health centres, which receive nine million patient visits a year.

Storm Gloria leaves eight dead and three missing in Spain 16:56
Eyewitness to Auschwitz: ‘We were held in the wagons like animals’ 16:34
Trump criticises ‘hoax’ impeachment trial as he departs Davos 13:47
Greek islanders protest over crowded migrant camps 10:37
Fears of pandemic grow as coronavirus spreads beyond China 09:42

1 Election 2020: 10 key questions to ask candidates on your doorstep
2 Eyewitness to Auschwitz: ‘We were held in the wagons like animals’
3 Election 2020: Peter Casey to stand in both Donegal and Dublin West
4 Eating out in Dublin – the homeless way
5 Which jobs do teenage girls and boys aspire to have by age 30?
Real news has value SUBSCRIBE