Romania under fire over referendum to ban same-sex marriage

Government rallies its rural base amid street protests and EU criticism 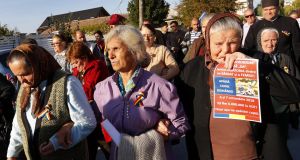 Romanian elderly women marching during a support rally for the family redefinition referendum planned for this weekend, southeast of Bucharest, on Thursday. Photograph: Robert Ghement/EPA

Romania’s government is coming under fire from rights groups and members of the European Parliament for backing a referendum this weekend on whether to put a constitutional block on same-sex marriage.

Romanian law does not recognise same-sex couples, but ultra-conservative groups fear the constitution’s current definition of marriage as a union between “spouses” could allow homosexuals to wed in the future.

An alliance of NGOs and church groups called the Coalition for the Family collected the signatures of three million people calling for a referendum on whether marriage should be constitutionally defined as a union between a man and a woman.

The government not only backed the referendum but pushed for it to be held over two days, Saturday and Sunday, apparently to help turnout reach the 30 per cent mark required for the vote to be valid.

The ruling Social Democrats (PSD) insist the matter is a purely domestic affair, but it comes amid growing EU concern that Romania’s government is following Hungary and Poland down an “illiberal” path of attacks on political opponents, freedom of speech, the rule of law and democratic norms.

“Allowing this referendum to take place adds validity to anti-LGBTI rhetoric and encourages hate speech and violence against LGBTI individuals,” more than 40 MEPs wrote in a letter to Romanian premier Viorica Dancila this week.

The vote promotes “the message that single-parent families, non-married partners with children...and all other families that do not fall under the narrow definition proposed by the referendum do not deserve to be recognised and protected,” they added.

“The UN convention on the rights of the child – ratified by all EU member states, including Romania – never defines a family as between one man and one woman, granting all children the same rights, regardless of who are their parents.”

Human Rights Watch, meanwhile, called the referendum “little more than a thinly veiled attempt to scapegoat a vulnerable minority” and something “incompatible with being a member of the EU”.

The Coalition for the Family, which also opposes abortion and subsidies for contraceptives, insists it is simply standing up for traditional Christian values.

Analysts say the government’s support for the referendum comes directly from PSD chief Liviu Dragnea, who is barred from holding office due to a conviction for vote rigging, and controls the cabinet from behind the scenes.

Facing street protests and EU and US criticism of his push to soften anti-corruption laws, Mr Dragnea appears to be using the referendum to connect with the PSD’s base, which is rural, conservative and obedient to the influential Orthodox Church.

The vote also distracts attention from an opposition bid to call another referendum on tightening the ban on convicted criminals like Mr Dragnea holding public office, and from his appeal against a recent guilty verdict in an abuse-of-power case.

“Dragnea wanted a counterattack to mobilise [PSD] voters,” said Alina Mungiu-Pippidi, a Romanian professor of democracy studies at the Hertie school of governance in Berlin.

“It’s sheer opportunism. Everyone wants to be in the good graces of the Romanian Orthodox Church.”