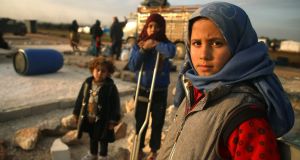 Syrian children pose for a picture as their families prepare to flee a camp for the displaced, east of Sarmada in the north of Idlib province, on Sunday. Photograph: Aaref Watad/AFP via Getty Images

Government air strikes have hit hospitals and refugee camps in northwest Syria and killed about 300 civilians as President Bashar al-Assad’s forces press an assault against the last rebel stronghold, the United Nations said on Tuesday.

UN officials said relief agencies were overwhelmed by the humanitarian crisis as nearly one million civilians, most of them women and children, had fled towards the Turkish border in bitter winter conditions to escape the onslaught.

“Civilians fleeing the fighting are being squeezed into areas without safe shelter that are shrinking in size by the hour. And still they are bombed. They simply have nowhere to go,” UN human rights chief Michelle Bachelet said in a statement.

Syrian and Russian warplanes meanwhile kept up raids on the town of Darat Izza in Aleppo province on Tuesday, witnesses said, one day after two hospitals there were badly damaged.

At Al Kinana Hospital, blown-out walls and dust-covered medical cables and supplies were strewn about the hospital after two staff were wounded on Monday, witnesses said.

At talks in Moscow on Tuesday, Turkey told Russia its troops were ready to push the Moscow-backed Syrian forces from rebel-held areas if they did not pull back to behind a line of Turkish observation posts in Idlib province.

“[The Turkish delegation] conveyed clearly that Turkey made the necessary military preparation to make sure the Syrian government withdraws to previous borders if they do not do retreat themselves,” Omer Celik, a spokesman for Turkey’s ruling AK Party, told reporters in Ankara.

Turkey says it cannot cope with a new refugee influx that would swell the numbers of the 3.6 million Syrian refugees already stranded inside its borders.

Appearing on national television on Monday, Mr Assad said the rapid military gains presaged the eventual defeat of the nine-year-old insurgency against him although it could still take time. The rebel factions include Turkish-backed rebels and jihadist militants.

UN human rights spokesman Rupert Colville, asked if Syria and Russia were deliberately targeting civilians and protected buildings, said: “The sheer quantity of attacks on hospitals, medical facilities, and schools would suggest they cannot all be accidental.”

The attacks could constitute war crimes, Mr Colville said at a briefing in Geneva.

The UN human rights office said it had recorded 299 civilian deaths since January 1st, about 93 per cent caused by the Syrian government and its allies.

The swift advance of government troops, backed by Russian air strikes, through northwest Syria has caused the biggest displacement of the war as people flee towards a shrinking pocket near the Turkish frontier where insurgents hold their last strongholds.

A UN spokesman, David Swanson, said close to 900,000 people had fled conflict zones in Idlib province and western Aleppo since December, more than 80 per cent of them women and children.

Many have been unable to find shelter and are sleeping outside in freezing temperatures, burning plastic to stay warm and at risk of disease and death. “Only half of all the health facilities in northwest are still functioning now,” Mr Swanson said.

Hurras Network, a Save the Children partner in Idlib, said seven children including a seven-month-old baby had died from freezing temperatures and bleak conditions in displaced persons camps.

About 525,000 children are among those trapped, the UN children’s fund, Unicef, said.

The Syrian army said on Monday it had taken full control of dozens of towns in the Aleppo countryside.

The M5 highway linking Damascus to Aleppo, the focus of recent fighting, was re-opened to civilian traffic on Tuesday after government forces recaptured it last week, the UK-based Syrian Observatory war monitor reported.

The opposition said air strikes in southern areas of Idlib province had left dozens of towns and villages in ruins in what it called a “scorched earth policy”.

The Russian and Turkish delegations meeting in Moscow were trying to reconcile their differences over Idlib, which have raised questions over the durability of their co-operation.

Turkey has sent thousands of troops and convoys of military equipment to reinforce its observation posts in Idlib, established under a 2018 de-escalation agreement with Russia.

Moscow has accused Turkey of flouting their agreements and failing to rein in militants it said were attacking Syrian and Russian forces.

In one positive note, Turkish and Russian troops have restarted joint patrols near the border that had been halted since October, at Russian defence ministry official said.

Trucks carrying aid supplies still cross from Turkey into northern Syria in a UN relief operation, the UN Office for the Co-ordination of Humanitarian Affairs said on Tuesday. – Reuters