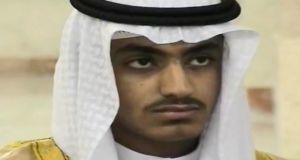 The reported death of Hamza bin Laden, son and presumptive heir of al-Qaeda’s founder, amounts to a public relations boon for the Trump administration but is unlikely to have a major impact on the organisation and its affiliates.

US officials said he was killed in 2017 or 2018 in an operation in which US forces participated.

The lack of date, place and colourful details on the fatal strike means kudos will be brief and cannot be compared to the Obama administration’s highly publicised US commando operation that killed his father, Osama bin Laden, and brother Khaled in Abbottabad, Pakistan, in 2011.

At that time the elder bin Laden remained involved in al-Qaeda’s strategic planning and was regarded as its ideologue. Al-Qaeda’s military commander Ayman al-Zawahiri, who had assumed responsibility for carrying out operations, succeeded as head of the organisation.

However, he did not have bin Laden’s charisma and remains isolated and in hiding in the mountains of Afghanistan and Pakistan.

Al-Qaeda “central” continues as the historical base of bin Laden’s movement but has little contact or control over its offshoots and affiliates. Consequently, Osama bin Laden’s demise did not have a major negative impact on al-Qaeda franchises and offshoots, which had proliferated around the world due to war, instability, and widespread disaffection among youth in the Middle East, Africa, Asia and elsewhere.

Born in Saudi Arabia to Bin Laden’s third wife, Hamza (30) was said to be one of his father’s favourite sons. As a child he was shown in propaganda videos with his father and participating in assault courses with grown fighters. After years in hiding with his mother, Hamza joined Osama in Abbotabad but escaped death when he was sent to Peshawar.

He disappeared for several years but he re-emerged in 2015 in a voice message hailing the his father’s “martyrdom” and lauding al-Qaeda operations in Syria, Yemen and north Africa and jihadi attacks in the US. He called on jihadis to strike outside the region. Zawahiri was determined to make Hamza the face of an international jihad in order to reassert the core role of al-Qaeda central.

In 2017 Hamza, reportedly, took command of al-Qaeda’s Jama’at Ansar al- Furqan Bilad al-Sham and fought in Syria against the government, Russia and Turkey and its surrogate the Free Syrian Army. Further recorded statements prompted the US to put Hamza on its list of global terrorists.

Early this year, before Hamza’s fate was known, Saudi Arabia revoked his citizenship and the US offered a bounty of $1 million for information on his location.