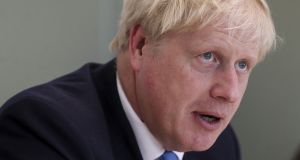 The huge cost of a no-deal Brexit was laid bare on Wednesday as the British government announced plans to set aside an extra £2.1bn (€2.3bn) for preparations including stockpiling of medicines, an extra 500 border officials and a public awareness campaign about disruption.

British prime minister Boris Johnson is ramping up the funding for a no-deal Brexit on October 31st though he claims that reaching a deal with the EU is his preference.

The move, announced by Sajid Javid, the chancellor, is designed to show Brussels that the UK is ready and willing to countenance leaving without a deal in three months’ time.

Mr Javid will provide a new immediate cash boost of £1.1bn and make a further £1bn available if necessary, taking the total allocation of spending this year alone up to £6.3bn.

From that cash injection about £344m will go to border operations; another 500 officers will be added to the 500 already promised this year. The aim is to improve processing of passport applications, increase training for customs staff to help businesses with declarations, and improve readiness for transport disruption around Kent ports.

Another £434m will go towards ensuring continuity of vital medicines and medical products, covering freight capacity, warehousing and stockpiling, while £108m will be spent on helping businesses understand the challenges they face.

Around £138m is allocated to a new public awareness campaign involving advertising, consular help for Brits living abroad and support for local areas, including Northern Ireland.

Labour branded the spending an “appalling waste of tax-payers’ cash, all for the sake of Boris Johnson’s drive towards a totally avoidable no deal”, especially as the majority of MPs had made clear their intention to block an exit without a withdrawal agreement.

John McDonnell, the shadow chancellor, said: “This government could have ruled out no deal, and spent these billions on our schools, hospitals, and people.

“Labour is a party for the whole of the UK, so we’ll do all we can to block a no-deal, crash-out Brexit, and we’ll deliver a transformative economic policy that delivers for the many, not the few.”

Meg Hillier, chair of the Commons public accounts committee, vowed to scrutinise the spending. “Just because Boris Johnson is making it sound like he’s fighting a war, with seven-days-a-week meetings in Whitehall, that is not licence to spend taxpayers’ money like water, throwing good money after bad.

“It is of course responsible for a government to be prepared for an emergency. But this is an emergency of the government’s own making – boring though it may be that taxpayers’ money could be spent on essential public services. There isn’t much headroom. There is a bit more than there was but not much. And I don’t think his spending pledges add up.”

She also cast doubt on how 500 additional border officials could be recruited and trained properly within the next three months. A Treasury source said the border officials would be a mix of existing staff retrained and redeployed on no-deal Brexit duties and new recruits.

Insiders have told the Guardian that in previous planning for a no deal in March, HMRC forecast that around 5,500 extra staff would be needed, with the majority in “customer compliance”. Insiders warned that those working on surveillance and smuggling needed years of training.

There were internal arguments that more staff were needed considering that before the single market there were 100,000 staff dealing with all aspects of customs, passport checks, immigration controls and regulatory standards. While the government has said it will not be imposing any customs or checks such as food standards on the border in a no-deal Brexit, it is planning to impose tariffs which will require extra staff.

A cabinet source said the government was unleashing more spending because of concerns that businesses were not taking the threat of a no-deal Brexit seriously enough, after that possibility had been averted on March 29th.

The business lobby group the CBI warned this week that neither the UK nor the EU was ready for a no-deal Brexit on October 31st, saying “some aspects cannot be mitigated”.

The Institute for Government also issued a report on Monday saying there was “no such thing as a managed no deal” and that the hard Brexiteers predictions of a “clean break” from the EU would not materialise.

However, Mr Johnson has sought to make clear he will not accept the current withdrawal agreement from the EU with its “undemocratic backstop”. He is gearing up to blame Brussels for a no-deal Brexit if they refuse to take the backstop out of the deal.

In the next 48 hours, David Frost, Mr Johnson’s most senior EU adviser and Brexit negotiator, will go to Brussels to deliver in person the message to officials that the UK will leave without a deal unless the bloc abolishes the Irish backstop.

Mr Javid, a former remain voter, who has said he stands ready to support a no-deal Brexit, said: “With 92 days until the UK leaves the European Union it’s vital that we intensify our planning to ensure we are ready. We want to get a good deal that abolishes the anti-democratic backstop. But if we can’t get a good deal we’ll have to leave without one. This additional £2.1bn will ensure we are ready to leave on October 31st – deal or no deal.”

MPs have started their summer recess from parliament but a number of Conservatives are taking time out to consider how to stop a no-deal Brexit or whether they can even remain as members of their party if Mr Johnson decides to pursue a deliberate path of leaving without a deal.

Mr Johnson is facing extremely tight parliamentary arithmetic to gain approval in the Commons for a no-deal Brexit. He has a majority of two with the DUP that would fall to one if the party lost the Brecon and Radnorshire byelection on Thursday.

The prime minister’s senior adviser, Dominic Cummings, has told senior staff that No 10 was prepared to use “any means necessary” to secure Brexit on October 31st, and that Mr Johnson has not ruled out suspending parliament to try to force it through. – Guardian