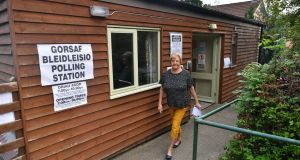 A voter leaves the polling station at Llyswen and Boughrood community hall in Llyswen, during the Brecon and Radnorshire byelection on Thursday. Photograph: Ben Birchall/PA Wire

Boris Johnson faces his first electoral test today as voters go to the polls for the Brecon and Radnorshire byelection.

The mid-Wales constituency has traditionally been a toss-up between the Conservatives and the Liberal Democrats.

If the Conservatives fail to retain the seat, Mr Johnson’s already slim Commons working majority will be cut to just one.

He was found guilty of submitting a false expenses claim and was later chosen to fight to reclaim his seat by his local party.

The Lib Dems are the bookies’ favourites and, if she wins, party candidate Jane Dodds would bring the party’s total number of MPs to 13.

Conservative candidate Mr Davies said his party has run a “clean and positive” campaign, adding: “Sadly, a few of our competitors have led a dirty campaign.”

Ms Dodds said people in Brecon and Radnorshire “have had enough of being forgotten by Westminster. They deserve better”

Tory grandees including new prime minister Mr Johnson, Commons leader Jacob Rees-Mogg and Chancellor of the Duchy of Lancaster Michael Gove have all visited the constituency in recent weeks.

Ms Dodds said her priorities are to stand up for Welsh farmers and oppose Tory cuts.

She added: “This byelection is, therefore, a choice between change with the Liberal Democrats or the same old broken politics with the Tories.”

On his visit to Wales on Tuesday, Mr Johnson said: “A vote for any party other than Conservatives pushes the Liberal Democrats one step closer to cancelling the referendum result.”

Despite Mr Johnson calling for voters to back the Tories to deliver Brexit, Mr Davies said this was a local campaign.

Mr Davies said the impact of Mr Johnson has been strong on the doorstep.

He added: “Boris seems to be very popular. I’ve not heard one person mention Jo Swinson.”

In terms of the impact of the Brexit Party, Mr Davies said he expects they will “probably take a few votes” from the Tories, but will probably have a greater impact on the Labour vote.

The recall petition was triggered after Mr Davies was convicted in March after he admitted submitting two false expenses invoices for nine photographs costing £700 to decorate his new office.

Mr Davies was later selected again by the Conservative Party to fight for the parliamentary seat he lost after more than 10,000 constituents signed a petition to remove him.

The Lib Dems could benefit from a “Remain alliance” forged in the constituency, with Plaid Cymru and the Greens agreeing not to field candidates in the byelection. – PA