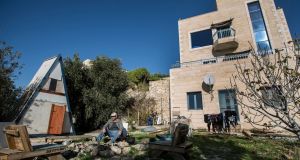 An Israeli settler sits outside his guest house, which was advertised on Airbnb, in the Nofei Prat settlement in the West Bank. Photograph: Tsafrir Abayov/AP

A class action suit against Airbnb has been filed in the Jerusalem district court to protest against the company’s decision to drop listings in West Bank settlements from its vacation rental website.

The petition alleges that removing or restricting the listings solely in the West Bank constitutes extreme, offensive and outrageous discrimination.

The suit also names the Israeli NGO Kerem Navot, which along with Human Rights Watch, published an in-depth report this week calling on Airbnb and other rental companies to remove settlement listings. The NGOs argued that Israel’s presence in the West Bank was illegal under international law and that in some cases the rooms were on land that belonged to private Palestinian landowners.

The suit was filed on behalf of Ma’anit Rabinovich, an Airbnb host who lives in the West Bank outpost of Kida, between Ramallah and Nablus, but Mr Flint said he expects more of the 200 West Bank settlers who are Airbnb hosts to add their names.

“As far as Airbnb is concerned, their clients can deny women or minorities to rent apartments from them, offer listings in war zones or in regions where tens of thousands of people have been expelled from their homes. The only thing that is prohibited is to be a settler in Israel,” the petition argued.

The petition noted that Airbnb has pulled listings from only one disputed territory, the West Bank, while continuing to list rentals in other disputed regions, such as Tibet and northern Cyprus.

The dispute between Russia and Georgia involved a military invasion but Airbnb nonetheless still offers 300 apartments there for rent, the petition stated.

Strategic affairs minister Gilad Erdan called on Israel supporters to boycott Airbnb. “They should cease using Airbnb and turn to other services,” he said, suggesting Booking.com as a possible alternative.

Chris Lehane, Airbnb’s global head of policy and communications, declined to comment on the calls to boycott the company.

“Israel is a special place and our over 22,000 hosts are special people who have welcomed hundreds of thousands of guests to Israel,” he said. “We understand that this is a hard and complicated issue and we appreciate everyone’s perspective.”

Tourism minister Yariv Levin has indicated that Israel may retaliate by “imposing a special and high tax” on Airbnb’s activities.

Israel says it will also turn to the Trump administration and could back lawsuits against Airbnb within US states that have legislated against anti-Israel boycotts.