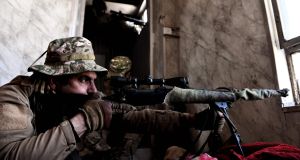 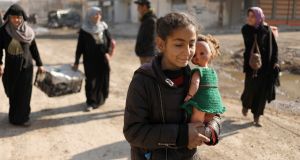 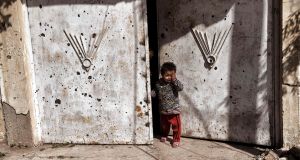 An Iraqi child in west Mosul as Iraqi forces struggle with Isis fighters for control of the area. Photograph: AFP/Getty Images

Iraqi forces on Tuesday retook the main government building in Mosul, the central bank branch and the museum where three years ago the militants filmed themselves destroying priceless statues.

The buildings, already in ruins, were not being used by Isis, but their capture is a landmark in the push to retake the militants’ last major stronghold in Iraq, now restricted to the heavy populated western half of Mosul.

Prime minister Haider al-Abadi flew into Mosul to visit the troops fighting to oust Isis from the city in which it declared its sprawling caliphate in 2014.

“Iraqis shall walk tall when the war is over,” Mr Abadi told state TV as he arrived.

Isis snipers continued to fire at the main government building after it was stormed, restricting the movements of the soldiers, and forces pushing further into western Mosul came under rifle and rocket fire.

“The fighting is strong because most of them are foreigners and they have nowhere to go,” said the head of a sniper unit for the Rapid Response, al-Moqdadi al-Saeedi.

“The game is up,” said Brig Gen Isler at the Qayyara West Airfield, south of the city. “They have lost this fight and what you’re seeing is a delaying action.”

Iraq’s Counter Terrorism Service (CTS), which spearheaded the assaults that won back east Mosul, was on Tuesday moving into the western half of the city, the final and trickiest battleground in the nearly five-month campaign due to the dense civilian population living in its narrow streets.

The CTS forces had fought their way well into the Mansour neighbourhood and were trying to advance street by street, delivering heavy fire on Isis sniper positions.

Federal police units arrived at a house in which CTS forces were stationed, but had to move out, one-by-one, to a neighbouring building as Isis rocket fire hit nearby homes.

One CTS operative on the ground said he thought it would take a few hours to retake Mansour, one of Mosul’s biggest neighbourhoods which lies southwest of the old city and could serve as a base to advance into the historic centre.

US special forces were seen walking between buildings in the same area, some carrying assault rifles with scopes and silencers. Helicopters attacked targets just to the north and thick smoke filled the sky from various explosions.

Dozens of civilians streamed out of the Mamoun district towards the CTS troops as machine-gun fire rang out in the background, adding to a wave of people displaced from Mosul that now numbers 211,000, 40,000 of whom fled last week alone, say UN agencies.

Some 750,000 people were estimated to live in west Mosul when the offensive began on February 19th.

Among the symbolic buildings retaken overnight was one that had served at Isis’s main court, known for sentences including stonings, throwing people off roofs and chopping off hands.

The militants looted the central bank when they took over the city in 2014 and took videos of themselves destroying archaeological artefacts. Traffic in antiquities that abound in the territory under their control, from Palmyra in Syria to Nineveh in Iraq, was one of their main sources of income.

The number of Isis fighters in Mosul was estimated at 6,000 at the start of the offensive on Mosul on October 17th, by the Iraqi military which estimates that several thousand have been killed since.

Lined up against them is a 100,000-strong force of Iraqi troops, Kurdish peshmerga fighters and Iranian-trained Shia Muslim paramilitary groups.