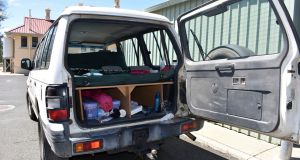 Woman told police she had been held captive by a man she had met at a party in Cairns. Photograph: APN Western Star/AP

A British backpacker was allegedly held captive in Australia and repeatedly raped in an ordeal lasting two months.

The 22-year-old woman was found with fractures to her face and strangulation marks to her neck on Sunday when police pulled over the vehicle she was driving in the outback in Queensland after she failed to pay at a petrol station.

She told officers she had been held captive by a man she had met at a party in Cairns.

He subsequently damaged and invalidated her passport, possibly to prevent her escape, Queensland police said.

Officers believe they saved her life after arresting the suspect who was hiding under clothes in a small alcove in the rear of the vehicle, which they had been travelling around the state in since January 2nd.

Det Insp Paul Hart told a press conference on Tuesday: “Police were really just attending a routine job in relation to a driver that was unable to pay for petrol.”

But they noticed she had various injuries and was “overly alarmed” by the officers’ presence when they pulled her over in Warrego Highway, Mitchell, about 550km (340 miles) from the east coast city of Brisbane.

“She advised that over a period of weeks she had been held against her will by the male person located in the vehicle,” the officer said.

“It was established they had previously had a relationship but at some point it had soured and he basically deprived her of her liberty and committed a number of offences against her as they travelled around the state.

“What she has experienced is no doubt horrific and terrifying and we commend her for taking the opportunity to speak to our police.

She has spoken to family in the UK but is unable to return while a new passport is arranged.

The tourist, who police believe had been in the country since 2015, was treated in hospital for injuries which also included scratches and cuts to her neck and bruising to her body.

The suspect, from the Manunda suburb of Cairns, appeared in court on Monday charged with a string of offences, including four counts of rape, eight counts of assault and four counts of strangulation.

The backpacker was described as being “almost zombie-like” when she walked into the petrol station in Mitchell, Queensland, on Sunday. Speaking to the Daily Mail, the owner of the petrol station, known only as Donna, said the 22-year-old entered the store in a “trance” after filling up her Mitsubishi Pajero with 60 dollars’ worth of petrol.

“She was in a state of shock when she came in, almost zombie-like.

“Then she walked in, wearing a black summer dress and said she couldn’t pay for the fuel. Tears were running down her face.

“But what struck me were her black eyes. She looked bad.

“She was nervous and shaking and I thought her behaviour was because she couldn’t pay for the fuel.

“I asked her if her black eyes were due to her ex-boyfriend and she nodded.

“I was very concerned about her.”