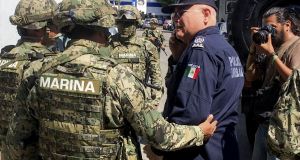 The federal and state police, backed by the Mexican army, took over security in the Pacific coast city of Acapulco on Tuesday, responding to suspicions that the city police force had been infiltrated by organised crime, authorities said.

Two police commanders were arrested on homicide charges and the rest of the force will face investigation, according to the Guerrero Coordination Group, a combined military and police task force for the embattled state of Guerrero.

The decision to disarm the local police was prompted by rising crime in the resort city and the “nonexistent response of the municipal police to the phenomenon,” a statement from the group said.

The director of the city transit police was also detained after he was found to be carrying unauthorized weapons. The Guerrero state police, backed by soldiers, marines and federal police officers, will replace the local police force, the statement said.

The latest episode in Mexico’s continuing drug war was a reminder that a dozen years after the government first sent soldiers into the streets to fight organized crime, Mexico is no closer to creating the effective local police forces that experts agree will be crucial to any effort to control soaring levels of violence.

The down-at-heel resort of Acapulco has been one of Mexico’s most murderous cities for years, besieged by battling drug gangs who long ago branched out from drug smuggling to extortion, kidnapping and other crimes. Behind the mountains looming over the hotel towers lining its bay lies a neglected city of some 800,000 people. On Friday alone, there were eight homicides in Acapulco. – New York Times