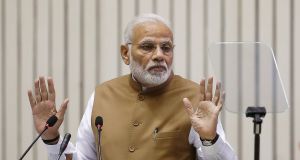 The scheme aims to provide free medical services to more than 500 million poor people. Dubbed “Modicare”, it will offer 100 million families an annual health insurance package of 500,000 rupees (nearly €6,000) for treatment of serious ailments such as cancer, heart and spine-related problems, dental and eye surgeries and other life-threatening and debilitating diseases.

Federal health officials said the scheme would include some 1,350 procedures, covering pre- and post-hospitalisation, diagnostics and medicines.

These measures, announced on Sunday, are an attempt by Mr Modi’s Hindu nationalist Bharatiya Janata Party (BJP) government to reform a national public health care system that faces an acute shortage of hospitals and doctors.

India spends barely 1 per cent of its gross domestic product on public health, a proportion that is among the worlds lowest.

Officials say such low funding leads to disastrous consequences that push some 7 per cent of India’s population of 1.3 billion into poverty each year, as quality state-run hospitals are limited in number, primary care facilities are poor and private clinics expensive.

“This is the world’s biggest healthcare scheme, benefiting more than the combined population of the US, Canada and Mexico,” Mr Modi said as he launched the countrywide plan from Ranchi, capital of India’s eastern Jharkhand state.

The poor of India must get all the healthcare facilities of the rich, the prime minister said.

Health ministry officials in New Delhi said eligibility for the scheme in government and private hospitals would be decided on the basis of data provided by the 2011 socio-economic census.

The scheme is expected to cover the two most vulnerable groups – the 29 per cent of Indians who live below the poverty line and others from the lower middle class, who hold irregular, poorly paid jobs but are burdened by massive debt.

The healthcare plan will initially be rolled out in 31 states and federally administered territories. Four provinces and the union territory of New Delhi, all ruled by Opposition parties, have opted to stay out of the scheme, claiming their individual healthcare programmes are better than Modicare.

Critics said the scheme had been launched in a hurry for political gain and lacked adequate funding to sustain it.

“By announcing the over-ambitious health scheme, the PM has an eye on the general elections due early next year ,” said Seema Mustafa of the Centre for Policy Analysis in New Delhi. It was a populist measure that could earn the BJP rich electoral dividends as healthcare was a major issue for most Indian households, she added.

But private and state-run hospitals, more than 13,000 of which have signed up for the scheme, are echoing Modi and referring to the health scheme as a “game changer”.